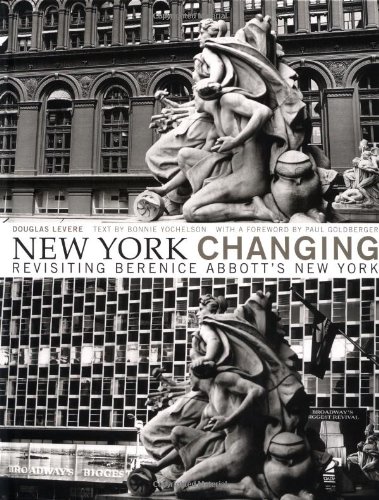 New York Changing: Revisiting Berenice Abbott's New York
by Paul Goldberger
Publisher's Description
Berenice Abbott’s 'Changing New York' project in the late 1930’s created a majestic documentation of Manhattan and the surrounding boroughs. Since 1997 I have returned to the original sites, with the identical camera, an 8x10 Century Universal, at the same time of day and year. A single photograph gives the illusion that time stops. A rephotograph lifts that illusion. In this tangling of the old and the new, the different and the same, lies the truth that Berenice Abbott understood well. All is flux; change is the only permanence. I hope that our paired works constitute a fresh invitation—not only to the rephotographers of the future but to anyone interested in urban life. The future of our city depends, in great part, on understanding how past decisions have played out. DOUGLAS LEVERE
ISBN: 1568984731
Publisher: Princeton Architectural Press
Hardcover : 192 pages
Language: English
Dimensions: 8.7 x 11.3 x 0.9 inches