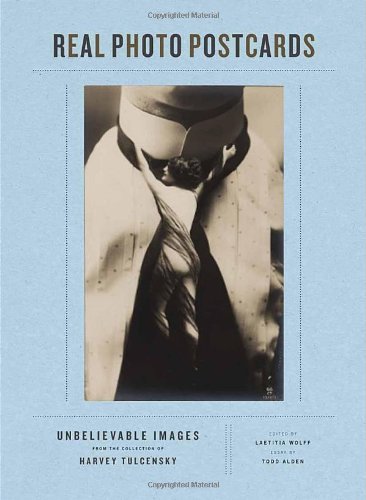 Real Photo Postcards: Unbelievable Images from the Collection of Harvey Tulcensky
by Laetitia Wolff
Publisher's Description
It may be hard to believe, but there actually was a time when the postcard image was not a cliché. To reach it, you'll have to set your clock back to the end of the nineteenth century, when an Act of Congress allowed Americans to mail a card for just one cent. A few years later, Kodak introduced an easy-to-use and affordable folding camera that put postcard power into the hands of ordinary citizens, setting off a craze. Real Photo Postcards is a collection of the most outlandish and idiosyncratic, beautiful and even occasionally bizarre images of this early postcard period.

Painstakingly assembled from the collection of Harvey Tulcensky, one of the world's most avid collectors of these original postcards, Real Photo Postcards includes images of natural phenomena (floods, storms, fires), Main Street America, rural life, political parades, and wacky 'exaggeration' cards (such as a photographically manipulated giant rabbit!). Together these cards show an oddly personal and intimate perspective of America at the turn of the 20th century.

Harvey Tulcensky is a New York– based artist whose work is included in many collections including the Museum of Modern Art.

Tulcensky has been collecting postcards for over 20 years.

Laetitia Wolff is the design editor of Surface magazine, the former editor of Graphis, and an international consultant on design trends and culture. She is the founder of the creative consul-tancy futureflair.
ISBN: 1568985568
Publisher: Princeton Archit.Press
Paperback : 207 pages
Language: English
Dimensions: 7 x 9.1 x 0.6 inches