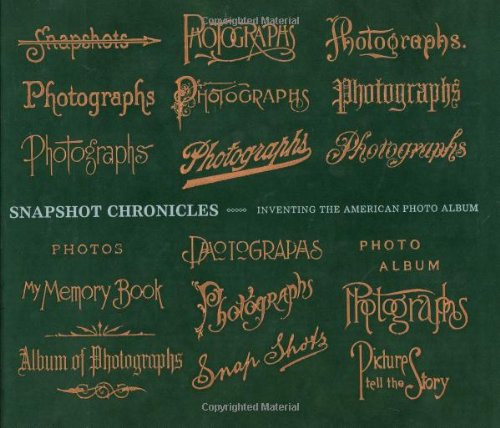 Snapshot Chronicles: Inventing the American Photo Album
by Stephanie Snyder
Publisher's Description
Today, the photo album is something we practically take for granted, and 'scrapbooking' is a billion dollar industry with its own television network. It was not always so. Before the camera, ordinary families had little more than the family Bible, a portrait of grandpa, and a drawer full of documents. Then Eastman Kodak introduced the Brownie, giving Americans the means to document and record their daily lives. Hundreds of thousands of these cameras were pro- duced, and as a result small collections of photographs were assembled and preserved in an astonishing assortment of albums, with photographs as the raw material for collages, constructions, and text experiments.

Snapshot Chronicles is a visual exploration of the creative outpouring made possible by the camera. Friends, family, travel, domestic life, special occasions, the workplace, farm and city life—these were all intermingled in early albums in surprising and dynamic forms. Men, women, and even children became the creators of their own visual biographies, and documenters of previously unprecedented aspects of American life.

Four essayists weave together the history of the photo album, making them not just a part of our past but a significant aspect of Americana. Snapshot Chronicles is designed by noted graphic designer Martin Venezky It Is Beautiful...Then Gone.

Barbara Levine is the Deputy Director of the Contemporary Jewish Museum and an avid photo album collector.