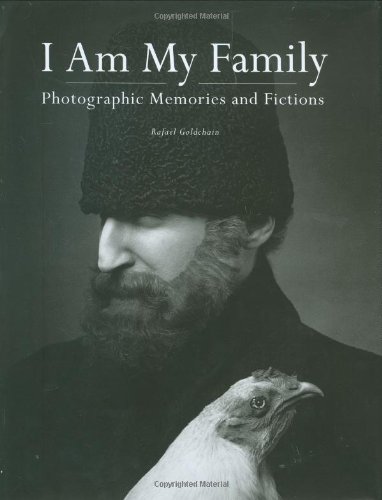 I Am My Family: Photographic Memories and Fictions
by Rafael Goldchain and Rafael Goldchain
Publisher's Description
Old family photo albums are fascinating. If you're lucky enough to own one, you've probably spent hours poring over half-faded black-and-white portraits of your ancestors, searching for similarities in their facial features and wondering what their lives might have been. Unfortunately, not every family has such easy access to their own history. Photographer Rafael Goldchain's Polish-Jewish ancestors emigrated to South America in the 1930s, and many others perished in Poland during the Nazi regime. Also lost in the turmoil of war and emigration were most of the portraits of his extended family. When Goldchain became a parent himself, he decided to make up for this lack of evidence and recreate the lost gene- rations of the past, in the present.

Rafael Goldchain's I Am My Family is a family album of traditional portrait photographs with an unconventional twist: the only subject is Goldchain himself. In an elaborate process involving genealogical research, the use of makeup, hair styling, costume, and props, Goldchain transforms himself into his ancestors and captures their personifications with the camera. Taking some liberties with historical accuracy, Goldchain has assembled a fascinating cast of characters: from his short-story-writing grandfather, to his great-aunts Pola and Fela, to the Rabbi Gur's nephew in wedding dress, Goldchain reinvents himself over and over again. These beautifully reproduced self-portraits trace the evolution of Jewish culture from tradition to modernity and invite us to engage the history of a family decimated and scattered by the traumatic events of the 20th century. Featuring an insightful essay by curator Martha Langford, the portraits are complemented by a selection of the archival images on which they are based as well as selections from the artist's handwritten sketchbooks.
ISBN: 1568987382
Publisher: Princeton Archit.Press
Paperback : 168 pages
Language: English
Dimensions: 8.3 x 10.1 x 0.8 inches