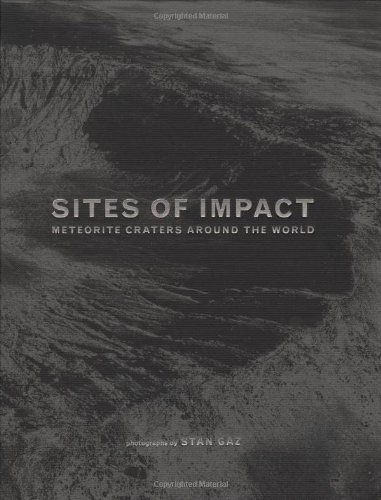 Sites of Impact: Meteorite Craters Around the World
by Stan Gaz
Publisher's Description
The Earth is pockmarked with the evidence of ancient collisions: huge craters blasted into its surface by thousands of pounds of meteorite fragments traveling at approximately 50,000 miles per hour. Ranging in age from those formed in this century to billion-year-old specimens, the Earth's meteorite craters are eroding at a rapid pace. The best-preserved impact sites are often difficult to access—buried under ice, obscured by foliage, or baking in desert climes. These desolate landscapes are connected to another place outside of our world, and for photographer Stan Gaz they are sites of pilgrimage—steps in a journey begun as a curious young boy accompanying his father on geological expeditions, and culminating in a six-year journey traveling the globe in search of these sites, much of that time spent leaning his twenty-pound, handheld Hasselblad medium format camera out of an open-sided helicopter.

The eighty-five astounding black-and-white photographs collected in Sites of Impact transcend the purely documentary and intersect the sublime. They are large-scale, aerial landscapes infused with a child's sense of wonder and an adult's preoccupation with the fragility of life. Like the sites themselves—natural monuments to explosive destruction and concomitant creation—the images speak to the vulnerability of the Earth and the significance of our place in the universe. In addition to photographs of the craters and their surrounding landscapes, Gaz includes photographs of actual meteorites and of his own carefully crafted sculptures that recreate their often dynamic form and mimic their specific mineral content. Anecdotal passages about the artist's experiences photographing each crater are interspersed with scientific data regarding the crater's location, age, structure, and condition. An essay by Earth scientist Christian Koeberl summarizes what we know—and do not know—about meteorite impact events, while an essay by photo historian Robert Silberman places Gaz's pictures within the traditions of landscape photography and the aesthetics of the sublime.
ISBN: 156898815X
Publisher: Princeton Archit.Press
Hardcover : 146 pages
Language: English
Dimensions: 10.2 x 12.9 x 0.8 inches