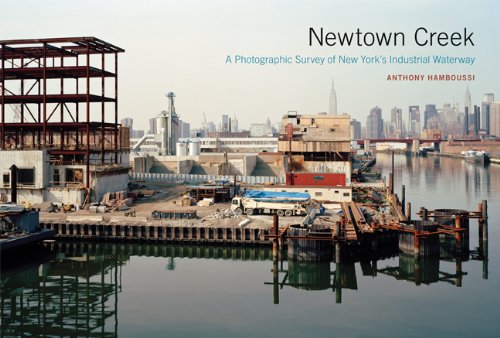 Newtown Creek: A Photographic Survey of New York's Industrial Waterway
by Anthony Hamboussi
Publisher's Description
Once a tidal creek meandering through marshlands rich in herbs, grasses, fish, waterfowl, and oysters, Newtown Creek today is a toxic cesspool that brings up raw sewage every time it rains. A tributary of New York's East River that forms part of the border between Brooklyn and Queens, Newtown Creek has long been at the heart of the city's 'industrial backyard,' serving as home to numerous industries, storage/warehouse facilities, waste transfer stations, and power plants, and as the dumping ground for unwanted byproducts and toxic waste. Site of a 17-million-gallon underground oil spill that still contaminates the area, Newtown Creek is currently under consideration by the Environmental Protection Agency for designation as a Superfund site, but the creek, whose waterfront is for the most part inaccessible to the public, is still largely unknown to residents and visitors of New York alike.

Newtown Creek: A Photographic Survey of New York's Industrial Waterfront is an extensive documentation of this forgotten landscape that shows the evolution of the built environment over five years in more than 230 images. Photographer Anthony Hamboussi followed the creek through the neighborhoods of Hunter's Point, Greenpoint, and Bushwick, shooting over fences and gates where he could not gain access, to record the bare industrial landscape. From the ruins of Morgan Oil and the Newtown Metal Corporation, to the construction of the new water treatment facility, to the footprints of the former Maspeth gas holders, Hamboussi recorded sites that may soon undergo further transformations. His survey captures the creek at a moment in time when gentrification and revitalization are just starting to change the area, providing a glimpse into the history of industrial New York. An insightful essay by Paul Parkhill puts Hamboussi's work into context.