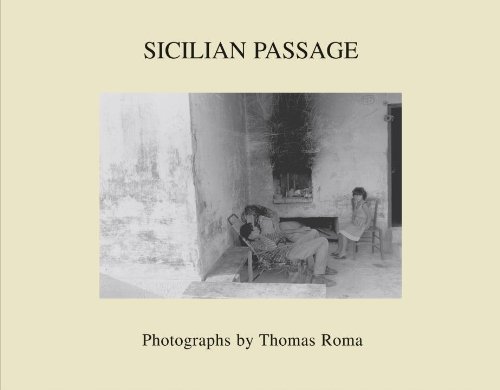 Sicilian Passage
by Thomas Roma
Publisher's Description
“Sicilian Passage is a timeless view into a landscape and its people. Thomas Roma’s eloquent photographs of Sicily are like beautiful poems about a land that he loves.” —Mary Ellen Mark Sicily: a land of mystery and myth. Inspired by stories told by his mother’s family, famed documentary photographer Thomas Roma left his native Brooklyn for Sicily in search of his roots in 1977. Photographing abroad on a Guggenheim Fellowship, Roma spent months at a time over the next fourteen years traversing the island, challenging himself to connect with a culture and a lifestyle completely foreign to his experience as a New York City street photographer. In Sicilian Passage, Roma taps into the timeless essence of Europe’s agrarian past. His photographs of the familial homeland are untainted by stereotypical notions of Sicilian culture. Instead of old ladies in black veils gossiping on the stoop, Roma’s images are lyrical odes to the country pastoral. Through his lens, we are transported to another land where nature and the climate have tamed its inhabitants into a slower rhythm: gnarly ancient trees grow haphazardly in the crop fields; marble ruins erupt from the hillsides; shirtless young shepherds tend to their flocks under a ruthless Mediterranean sun. Sicilian Passage is an ode to the mysteries of the timeless in “The Island in the Sea of Light.” “Tom told me that as a child he used to try to dream of Sicily as he drifted off to sleep. Lying in bed, he’d picture mountains that were higher than the Berkshires he had seen in upstate New York, and a sea that was bluer than it was at the beach at Coney Island. He’d imagine a place where the sun was brighter and where figs grew bigger and sweeter than they did in his grandparent’s backyard in Brooklyn. Sicilian Passage is an attempt to reimagine that dream.” —Anna Roma
ISBN: 1576871649
Publisher: powerHouse Books
Hardcover : 84 pages
Language: English
Dimensions: 9.1 x 7.9 x 0 inches