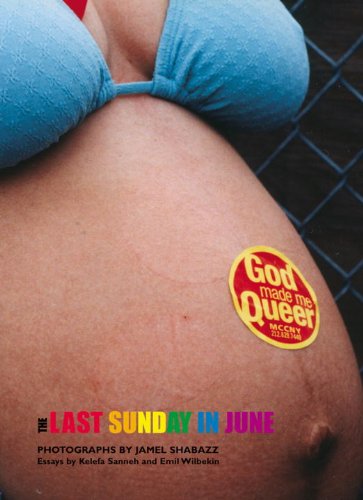 The Last Sunday in June
by Jamel Shabazz
Publisher's Description
On the last Sunday in June, New York City celebrates Gay Pride Month by staging a parade of floats showboating south down Fifth Avenue to Christopher Street. Originally staged to celebrate the anniversary of the Stonewall Riots of 1969, which mark the birth of the Gay Pride movement and the eventual recognition of rights for gays and lesbians, Gay Pride Month now takes over the West Village and Chelsea for the entire month of June, culminating in a parade that attracts close to a million people of all genders, sexualities, ethnicities, and classes. The four-on-the-floor thump of house music pumps as caravans of divas, boob-flapping biker gals, and costumed creatures preen, primp, and pucker for cameras and spectators on the street. Equally colorful is the crowd, clapping and cheering for the performers before parading about town themselves. As a follow-up to his crazy successful, fashion and pop culture-influencing book of hip-hop’s early days, Back In the Days, photographer Jamel Shabazz takes a sharp turn in bringing to light a vastly original—and under-documented—emerging subculture in Last Sunday in June. Drawing from an enormous cast of eye-catching characters, Shabazz showcases an extraordinary collection of luscious lesbians, tasteful transsexuals, and dramatic drag queens done up in their Sunday best to celebrate Gay Pride.
ISBN: 157687172X
Publisher: powerHouse Books
Hardcover : 128 pages
Language: English