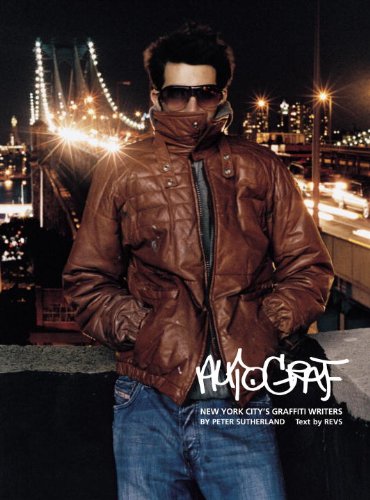 Autograf: New York City's Graffiti Writers
by Peter Sutherland
Publisher's Description
A controversial art form and provocative cultural phenomenon, graffiti has inestimably influenced our entire environment—from music and fashion to advertising, architecture, and graphic arts. Yet it is an illegal activity, which makes its practitioners wanted criminals. Motivated by a desire for self-expression and recognition, the act of marking one’s territory is done at the risk of severe consequences including fines and jail time. Graffiti writers are outlaws, unknown artists whose faces are known only to their peers. Treated as criminals by the law and dismissed as artists by the establishment, writers are perceived as either alluring anti-heroes or loathsome vandals, and usually remain anonymous to their audience. But not to photographer Peter Sutherland.

With an eye for style, Sutherland captures all of the gritty glory and glamour of the graffiti world and its warriors. Collected for the first time in Autograf: New York City’s Graffiti Writers, Sutherland presents a never-before-seen chronicle of the people and places that populate New York’s famed graf scene. Featuring old-school legends FUTURA, STAY HIGH 149, LADY PINK and DOZE, as well as new-school writers COPE 2, CLAW, KR, CYCLE, KAWS, SACER, EARSNOT, SERF, RATE, CINIK, UFO, and DSENSE, among many others, each one of the fifty-three portraits is authentically tagged by the individual writers using the same paint markers that brought them fame. Complemented by one hundred sixty landscape photographs and featuring handwritten text by legendary recluse REVS, Autograf is the only book to showcase New York City’s graffiti scene as it was created and defined by some of the most prolific artists of our time.

Includes a copy of the book in a clothbound foil-stamped slipcase, a color print of an outtake photograph, tagged by the pictured writers, and a digital c-print by MINT and SERF of 1134nyc exclusively produced for this edition of 85.
ISBN: 1576872033
Publisher: powerHouse Books
Hardcover : 112 pages
Language: English