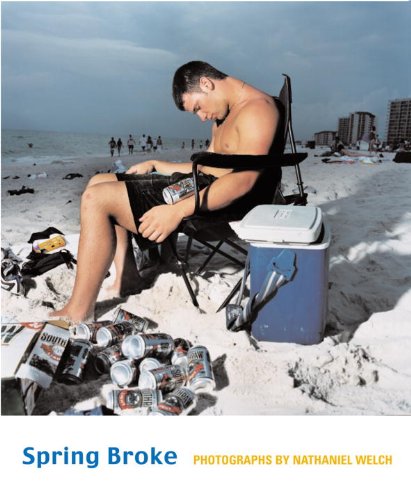 Spring Broke
by Nathaniel Welch
Publisher's Description
“When I first saw the pictures from my older brother’s spring break, and seen his videos, I went, ‘Damn, that’s sweet. I gotta go down there.’ And I get down there and that’s what it’s like: girls flashing you for beads or whatever. If a girl doesn’t like the taste of beer, they do a beer bong, and they drink the whole beer in two or three seconds. They know there’s not going to be any consequences, nobody’s going to find out about it. They’re more likely to cheat on their boyfriends, or just hook up with whoever. You don’t even see them the next day. It’s pretty much an understanding. Nobody’s down there for a relationship.” —Anonymous Spring Breaker

Caligula would have understood the depraved decadence and desperate frenzy of spring break—American teens’ annual pilgrimage to shimmering shores, where sex on the beach is as much an afternoon activity as it is a fruity cocktail. A festival of sun and sin, of tanned flesh and binge drinking, spring break attracts thousands of high school and college students, who wash up on Florida’s shores like schools of breeding salmon, ready to indulge their insatiable appetites and hedonistic desires with total strangers.

A native Floridian, photographer Nathaniel Welch has been documenting these rites of passage for four years—and has captured scenes of agony and ecstasy in Spring Broke, his first monograph. Whether it’s partying at a kegger on the beach or engaging in group sex in the shower, entering a wet T-shirt contest or passing out on the bathroom floor, these teens’ uninhibited impulses are as absurd as they are disturbing. Yet Welch accepts, and even embraces, these raunchy rituals of extreme adolescence, allowing a strange sense of sadness to pervade. The morning after, broken spirits are left to reflect on their senseless acts, pack their bags, and head home. They say children are the future. Brace yourself.
ISBN: 1576872076
Publisher: powerHouse Books
Hardcover : 120 pages
Language: English