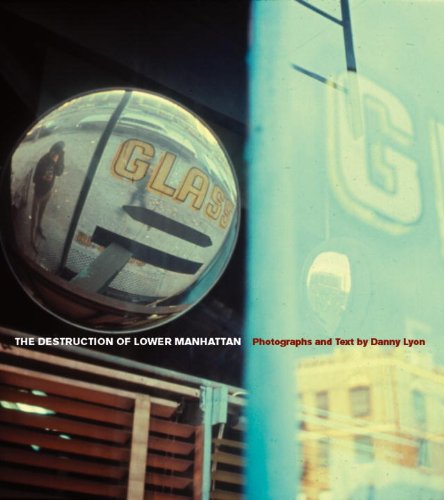 The Destruction of Lower Manhattan
by Danny Lyon
Publisher's Description
In 1967, Danny Lyon returned to New York City, having just finished The Bikeriders (Macmillan, 1968). He was twenty-five. Living in a loft on the corner of Beekman and Williams Streets in Downtown Manhattan, Lyon saw that half the buildings on Beekman Street were boarded up, about to be demolished. That year an incredible sixty acres of mostly nineteenth-century buildings were slated for demolition, all below Chambers Street. The seven-acre site where the Twin Towers would eventually stand was being cleared, a new ramp added to the Brooklyn Bridge, Pace University expanded, and the Washington Market was being moved to the Bronx. Much of the Lower West Side was being turned into rubble.

Lyon thought of the title The Destruction of Lower Manhattan first, and then made a record of each building before it was demolished. The book was released by Macmillan Publishers in 1969, and remaindered a few years later; the copies sold for one dollar each. It has been a collector’s item ever since.

Thirty-eight years after these photographs were made, many of them are the only record that survives of entire blocks of mainly nineteenth-century buildings that once lined Fulton Street, and West Street along the Hudson. Because of the disaster that would strike the city a generation later, New Yorkers have taken on a renewed and fervent interest in the architecture of their city. This work is a major contribution to that new world. For Lyon, these buildings in their last days standing were the embodiment of a beauty and pathos that people walking by in the street seldom noticed at the time. Those feelings were preserved in the photographs that today survive exactly as the young author intended, as a memory and a record of what was.