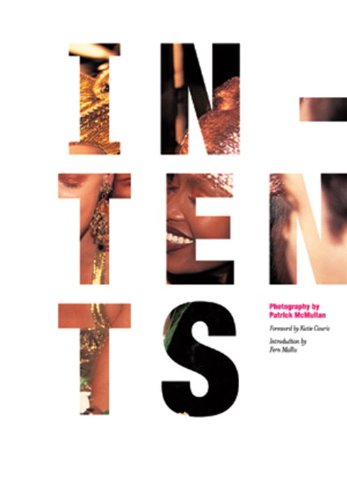 Intents
by Patrick McMullan
Publisher's Description
Concurrent with the tenth anniversary of 7th on Sixth, the organization that hosts New York's Bryant Park–based Fashion Week, InTents is your all-access pass to the only U.S. staging of this yearly event- from the backstage bustling of barely clad models to the front row jockeying of the A-list editors and celebrities du jour. With this monograph, famed celebrity and fashion photographer Patrick McMullan celebrates a decade of fashion and our unending fascination with it.

An unparalleled opus combining documentary and fashion photography in its most intimate moments, InTents captures, in a uniquely McMullan-esque take, runway shows of the established and upcoming designers. Featuring quotes by the fashion world's most famous players, and chronicling the highly charged lives of supermodels, celebrities, and fashion editors during this electric week of shows, InTents also pays tribute to the machine behind the scenes-the stylists, photographers, publicists, hair and makeup artists, and all those who make it happen every season.

A portion of the proceeds from the sale of InTents will be donated to the Entertainment Industry Foundation's National Colorectal Cancer Research Alliance.

Patrick McMullan was born in New York and raised in Huntington, Long Island. Educated at NYU, McMullan majored in business and 'minored in Studio 54.' The premier nightlife photographer in New York City, his work appears regularly in his weekly New York Magazine column, the 'Scene.' McMullan's monthly columns include: Allure, Interview, Flair Italia, Hamptons, Ocean Drive, and Gotham, among others. McMullan is a contributing editor to Vanity Fair, ELLE UK, and Men's Health. His photography has been featured in publications worldwide such as The New York Times Magazine and Vogue, and in international editions of Harper's Bazaar, Details, Tatler, and Out, to name a few. His published books include the critically acclaimed blockbusters so8os: A Photographic Diary of a Decade (powerHouse Books, 2003), Men's Show (Edition Stemmle, 2000), and Secrets of the Riviera (Welcome Rain, 2000). McMullan has a photography studio and lives in New York City.

Katie Couric is co-anchor of NBC's 'Today' Show and a contributing anchor for 'Dateline NBC.' Couric is co-founder of the National Colorectal Cancer Research Alliance (NCCRA), an organization she established with the Entertainment Industry Foundation (EIF). The first installment of what has become an annual “Today” series, Confronting Colon Cancer, received the George Foster Peabody Award. The NCCRA's and NBC's efforts to heighten colon cancer awareness have been recognized by the Archives of Internal Medicine and the Proceedings of the National Academy of Sciences. Couric and EIF worked with New York-Presbyterian Weill Cornell Medical Center on the establishment of the Jay Monahan Center for Gastrointestinal Health, named for Couric's late husband, who lost a nine-month battle with colon cancer in 1998.

Fern Mallis is the Executive Director of 7th on Sixth and a VP of IMG. She is widely credited with the creation of 7th on Sixth, an organization formed in 1993 to modernize, organize, and centralize the American runway collections. 7th on Sixth/IMG now produces Olympus Fashion Week in New York City and Mercedes-Benz Fashion Week at Smashbox Studios in Los Angeles. Mallis lives in New York City and the Hamptons.
ISBN: 1576872343
Publisher: powerHouse Books
Hardcover : 352 pages
Language: English
Dimensions: 0 x 0 x 0 inches