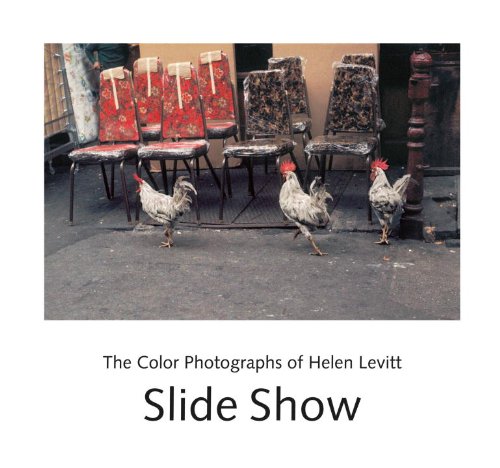 Slide Show: The Color Photographs of Helen Levitt
by John Szarkowski
Publisher's Description
“At least a dozen of Helen Levitt’s photographs seem to me as beautiful, perceptive, satisfying, and enduring as any lyrical work that I know. In their general quality and coherence, moreover, the photographs as a whole body, as a book, seem to me to combine into a unified view of the world, an uninsistent but irrefutable manifesto of a way of seeing, and in a gently and wholly unpretentious way, a major poetic work.” —James Agee

In 1959, and again in 1960, Helen Levitt received grants from the Guggenheim Foundation to photograph in color on the streets of New York, where she had photographed two decades earlier in black-and-white. But tragically, the best of these pioneering color pictures were stolen from her apartment in 1970 and she had to start over again. In 1974 the new work was shown as a continuous slide projection at New York’s Museum of Modern Art—an early example of a slide show presentation by a museum and one of the first exhibitions of serious color photography anywhere in the world.

Slide Show presents more than one hundred photographs—including eight surviving images from the 1959–60 series—more than half of which have never been exhibited or published before. This impressive monograph is a worthy successor to her magnum opus, Crosstown (powerHouse, 2001), which included the largest collection of her color pictures to date, and to her more intimate volume of black-and-white work, Here and There (powerHouse, 2004), which presented more than eighty “unknown” Levitts taken over six decades.
ISBN: 1576872521
Publisher: powerHouse Books
Hardcover : 120 pages
Language: English
Dimensions: 0 x 0 x 0 inches