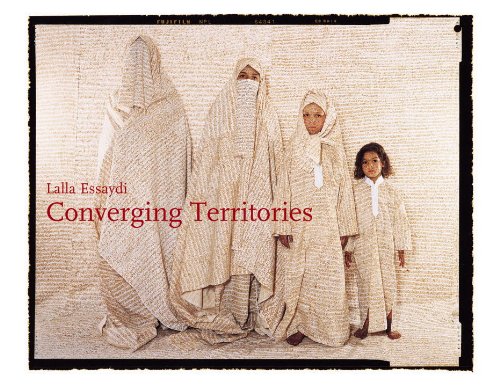 Converging Territories
by Lalla Essaydi
Publisher's Description
According to Islamic tradition, men dominate the public sphere and women are expected to remain indoors at most times. In photographer Lalla Essaydi’s native Morocco this confinement has been further used as a punishment for those who transgress the rules of gender conduct. A practice only recently abandoned, women were at times even required to spend periods as long as a month inside otherwise uninhabited homes. In an exploration into her home country and her childhood Essaydi reverses the meaning of these spaces in Converging Territories, using them as a place where women are seen, not hidden.

Essaydi’s subjects are given a voice not only through their actions, but also through the written word. The women pose after long sessions during which Essaydi covers their clothing and few areas of exposed skin, as well as the rooms themselves, with Islamic calligraphy. The rebelliousness of this act is added to by the fact that the words are drawn with henna—a form of adornment considered “women’s work.” In a seeming contrast, the calligraphy used is a sacred Islamic art form that was once inaccessible to women. As an artist living and educated in the West, Essaydi explores her past and family with this highly personal work. Meanwhile, her images reflect the complex female identities found in Morocco and other Muslim societies—and give women the opportunity to engage in the emerging culture of Islamic feminism.
ISBN: 1576872564
Publisher: powerHouse Books
Paperback : 32 pages
Language: English
Dimensions: 8.5 x 11.3 x 0.2 inches