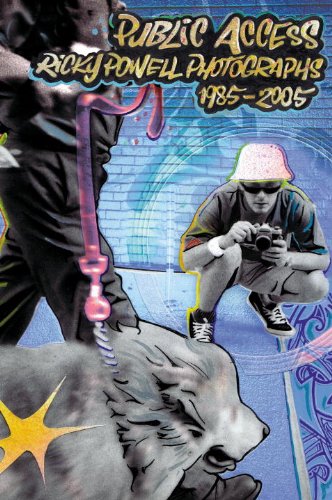 “Ricky Powell, aka the Rickster, has seen a lot of history. He has worked variously as a busboy, bike messenger, Frozade vender, substitute teacher, columnist, cable television host, comic, and dog walker. But he is best known as a wisecracking, self-described ‘playground rat’ who used his beat-up Minolta and party-crashing skills to become a nightlife fixture and a chronicler of the then-exploding world of hip hop.” —The New York Times

For two decades, Ricky Powell has prowled the streets of his native New York, toured the world with hip hop’s biggest acts, and full-on crashed celebrity-studded parties on both coasts. Equipped with only his wits and an instamatic camera, Powell elbowed his way into the center of the scene with no shame. “It’s for public access,” Powell could be heard, pleading for an interview with a pizza shop owner on his cult cable TV show, “Rappin’ with the Rickster.”