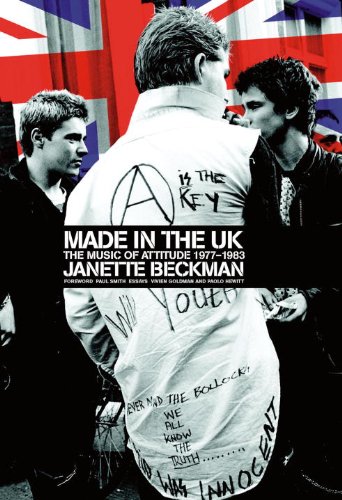 Made in the UK: The Music of Attitude 1977-1983
by Janette Beckman
Publisher's Description
When punk first rocked, the rough and rugged style on the streets was a world away from the super-slick music videos and corporate stylists that were to follow. And photographer Janette Beckman was on the front line of that hyper-energized time, capturing “the look” of the musicians and kids who were loudly defining an era. Collected for the first time in Made in the UK, Beckman’s powerful portraits celebrate the music and the attitude of Punk, Mod, Skinhead, 2 Tone, and Rockabilly culture in the UK.

Made in the UK: The Music of Attitude, 1977–1983 documents a time when British music pushed every boundary. Beckman began her career working for Melody Maker, one of London’s premier weekly music papers. She soon had extraordinary access to the musicians topping the UK charts—icons of an era when music had an agenda—including The Clash, The Sex Pistols, The Jam, The Undertones, The Specials, The Beat, The Police, The Ramones, The Rockats, The Raincoats (Kurt Cobain’s inspiration), Billy Idol, and Echo and the Bunnymen. Among these groups, this generation still had the radical idea that each and every punk, skin, mod, rude boy, and ted was just as important as the bands. Janette Beckman’s gritty aesthetic placed her on good footing among the kids on the street—and the portraits she made prove that attitude never dies.
ISBN: 1576872637
Publisher: powerHouse Books
Hardcover : 132 pages
Language: English
Dimensions: 6.9 x 10.1 x 0.8 inches