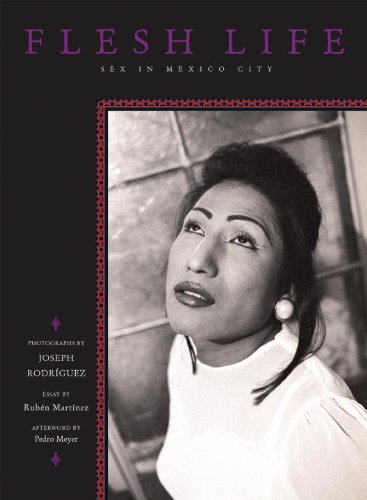 Flesh Life: Sex in Mexico City
by Joseph Rodriguez
Publisher's Description
'Spirit, flesh: in the end the same quest, born of a crumbling economy and identity. The single most apparent sign is the proliferation in prostitution, an ‘outing’ of what has always existed, but furtively. The government has officially admitted that it is impossible to rein in the sex trade; Mexico City is not busy busting working women and men, but formulating legal and health guidelines for sex-workers.' (Rubén Martínez)

From Nezahualcoyotl, the largest working-class suburb on earth, to La Condesa, Mexico City’s hipster hangout, putas and putos stroll the streets, cruising for johns and surviving on their wit, born out of true desperation. These men, women, and everyone in-between are sex-workers in a country where extra-marital sex is considered a mortal sin, and, confoundingly, where they ply their trade without official reprisal. In Mexico, macho husbands consort with other men, and virgencitas are anything but. Joseph Rodríguez and Rubén Martínez confront these contradictions head-on in Flesh Life: Sex in Mexico City.

In Rodríguez’s series of startlingly intimate black-and-white photographs and Martínez’s gripping text, we encounter a re-sexualized and re-spiritualized country in flux, embracing religious dogma while discarding taboos that once shrouded sex in a haze of artifice, euphemism, and history. Rodríguez’s beautiful and brutally honest images suggest a culture in which spirit and flesh have always been inextricably intertwined.
ISBN: 1576873102
Publisher: powerHouse Books
Hardcover : 96 pages
Language: English
Dimensions: 0 x 0 x 0 inches