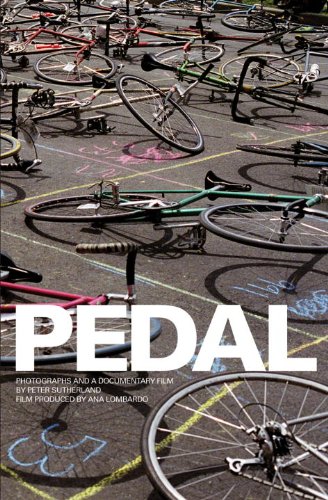 Pedal (Book & DVD)
by Peter Sutherland
Publisher's Description
Best-selling author Peter Sutherland’s newest title, Pedal, is a wild ride alongside a band of New York City’s most feared and respected inhabitants: bike messengers. In a book of photographs and a documentary on DVD, Sutherland follows the frenetic trips and lives of the cyclists who live by their own rules of the road.

In Pedal, Sutherland documents bike messengers competing in the 2005 Cycle Messenger World Championships in New York City. Going straight to the center of this urban subculture, Sutherland serves up compelling portraits of the competitors from dozens of countries, in motion and at ease, checking out each other’s bags, lingering over modifications to bikes and bodies. Between events like sprints, distance racing, and skid contests, Sutherland shows us the riders’ elegant physicality, complex individuality, and unique community that crosses boundaries of race, gender, age, and class. And he doesn’t shy away from the blood and bruises that come part and parcel with the messenger’s life. Sutherland delves deep into the world of the messengers—a world usually seen from the outside—and returns with a dynamic document that evokes the unbridled anarchy and energy of its inhabitants.

The accompanying DVD is a fast-paced documentary film about surviving in the streets of New York City as a bicycle messenger. It features messengers from all walks of life as they battle traffic in a race to make their next delivery on time. Directed by Sutherland and produced by Ana Lombardo, Pedal the documentary lets viewers live the spectacle of the delivery itself. It premiered in 2001 at the South by Southwest film festival, and was later acquired by the Sundance channel, where it aired until 2004.
ISBN: 1576873145
Publisher: powerHouse Books
Paperback : 144 pages
Language: English
Dimensions: 5.8 x 8 x 0.8 inches