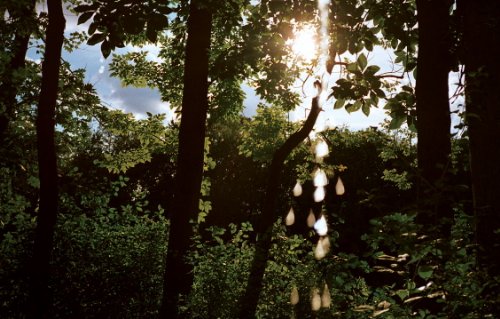 In 1998, Ellen Jong was at a party on Canal Street in New York’s TriBeCa. As the bathroom line was too long, she headed to the street to take a leak. Jong squatted just behind some junked furniture on the curb of the sidewalk, and her pee trickled down like wet paint on a wall. Being a photographer, she had her Yashica T4 with her, and turned around to her suspect puddle to capture what she thought looked more like blood in a murder scene than pee. Since that fateful urination, Jong has captured her tracks through New York, Miami, Shanghai, and Mexico, the countryside, woodside, and seaside, under moonlight and opposite sunset.

Since then, Jong has amassed a sizeable body of work, a collection of images that fuse documentary, landscape, and fine art photography and portraiture into a uniquely personal statement. The work, exhibited at various galleries, is all gathered in Pees on Earth: A Pissin’ Mission; a collection of images that are at once challenging, provocative, intriguing, courageous, amusing, and beautiful. These images capture not only Jong’s rebellious exuberance, but also offer a comment on what constitutes the personal and the political. Pees on Earth is a statement about the ownership of self, of sensuality, of humanity, and of womanhood—all expressed with beauty and a great deal of humor.

There’s a sigh of relief on every page of Pees on Earth. Jong’s photographs assert her place on the planet and, because we all share the act, they assert ours too. It is a manifesto for our collective existence, a cry for all sentient beings: 'I am! I pee!'
ISBN: 157687317X
Publisher: powerHouse Books
Hardcover : 112 pages
Language: English
Dimensions: 10.9 x 7.1 x 0.7 inches