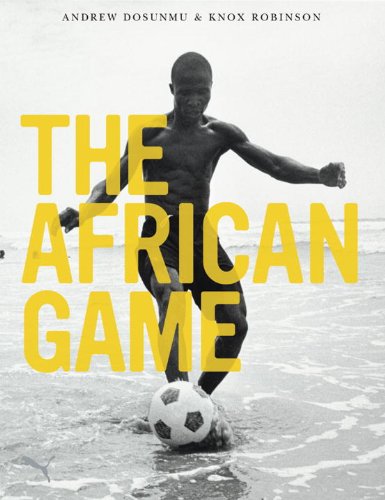 The African Game
by Andrew Dosunmu
Publisher's Description
The African Game is a unique vision of the continent as documented by Nigerian photographer and filmmaker Andrew Dosunmu. Punctuated with vivid essays by journalist Knox Robinson, The African Game looks to soccer as a way to explore modern African life, culture, and identity. A compelling, on-the-ground depiction of Africa’s passion for soccer, this book is the first look at the rich sporting culture that has produced some of professional soccer’s biggest and highest-paid stars. African Game will be a definitive resource during this summer’s World Cup, which will show the continent’s players emerging as some of the game’s best—as we look to South Africa as the host of the 2010 World Cup. As these pioneers change the way the game is played—and the way we think about the sport itself—The African Game provides crucial back-story and documents the soccer mania that has gripped the entire continent.

Like a film artfully moving through its plot, The African Game follows a narrative of the sport in Cameroon, Senegal, Togo, Cote D’Ivoire, Angola, Ghana, Tunisia, and Egypt by exploring its resonance at all levels of the culture, from national team sponsorship to the unmistakable street style that Africa’s soccer mania inspires. The African Game mixes classic portraiture and gripping reportage-style photography to frame Africa, its sporting heritage, and its everyday vibrancy in a way that is rarely seen—Africa as it actually exists, not as we imagine it to be. With imagistic essays framed by vital facts and stats about each team, The African Game will not only be an indispensable resource in the months leading up to the 2010 World Cup—it will be an unprecedented document of the sport and its place at the center of African popular culture.

PUMA will donate proceeds from the sale of The African Game to Grassroots Soccer, a non-profit organization that mobilizes the global soccer community in the fight against HIV/AIDS.
ISBN: 1576873242
Publisher: powerHouse Books
Hardcover : 256 pages
Language: English
Dimensions: 0 x 0 x 0 inches