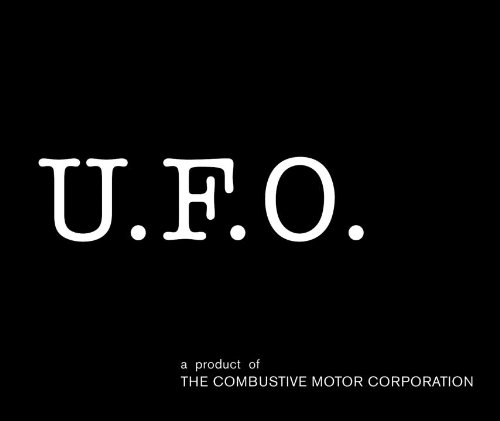 UFO
by Combustive Motor Corporation
Publisher's Description
Beneath the dark highway overpasses of Brooklyn, within the forbidden rail yards of Queens, and along the rooftops and stairwells of Manhattan, four urban explorers record and decode the work of one of New York City’s most vilified and elusive graffiti artists: UFO. Using historical and scientific documentation, government records, personal narratives, and photographic evidence, the Combustive Motor Corporation thoroughly documents the markings of their elusive obsession in U.F.O. A seamless blend of fact and fiction, art and enterprise, U.F.O. is a wild goose chase, after a figurehead of underground art that appears only in the form of his spray-painted avatars.

U.F.O. connects the contemporary markings of one underground artist, known only as UFO, to a far greater creative tradition, linking his artwork to an expressive history of communication, sublime and supernatural, dating back some 10,000 years. In its obsessive, often frantic, accumulation of theory and fact, belief, and evidence, U.F.O. passes through our collective understanding of graffiti into a place where our most common expectations of art and experience collide with the deepest unanswered mysteries of our human history.

Begun in 2004 as a treatment for a feature film, U.F.O. has become the first major book for the art collective Combustive Motor Corporation. It has documented UFO’s artwork around New York City for over three years, and its members describes themselves as having a 'second nature' for finding his often hidden symbols.
ISBN: 157687334X
Publisher: powerHouse Books
Paperback : 196 pages
Language: English
Dimensions: 0 x 0 x 0 inches