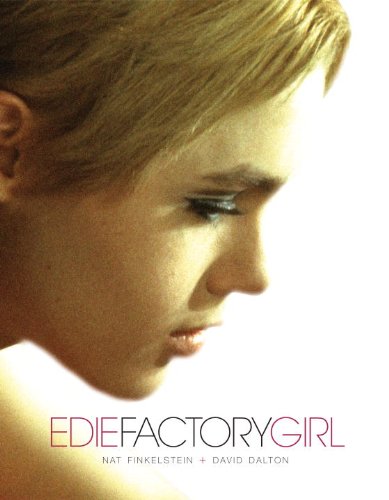 Edie Factory Girl
by Nat Finkelstein
Publisher's Description
She was riveting to look at, a sprite of the zeitgeist, the living distillation of the over-amped vision of New York in the mid-sixties. Like many exotic creatures that Andy Warhol shed his light on, she initially bloomed—became the symbol for all that was hip and stylish—and just as quickly began to disintegrate. Told with unsparing candor and with candid images that capture her at the peak of her Factory stardom, Edie Factory Girl is the short but enduring cultural story of Edie Sedgwick—releasing in time for the film of the same name starring Sienna Miller, and including rare photos of Miller as Edie.

David Dalton was just a teen when he became one of Warhol’s first assistants, and was present for the arrival of Edie: witnessing her rise, her Factory superstardom, and subsequent unraveling. Like an anthropologist thrown together with a tribe of 'wild' people, Nat Finkelstein entered the Factory just as Warhol was emerging as the supreme catalyst of the sixties. Among the freaky menagerie, Nat found Andy’s misbegotten princess the most fascinating and enigmatic character of her time, and with a compassionate lens recorded her fragile, fleeting beauty. Edie Factory Girl is a privileged glimpse into Warhol’s inner sanctum, via revealing interviews with intimates, friends, and scenesters, in which Edie orbits around the likes of Bob Dylan, Salvador Dali, Betsey Johnson, Lou Reed, Judy Garland, and many more, before departing as quickly as she came.
ISBN: 1576873463
Publisher: VH1 Press
Hardcover : 160 pages
Language: English
Dimensions: 0 x 0 x 0 inches