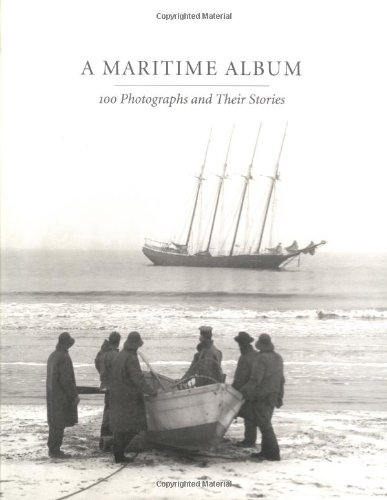 A Maritime Album: 100 Photographs and Their Stories
by John Szarkowski
Publisher's Description
This collection of historical maritime photographs is a showpiece for Szarkowski's curatorial judgement and Richard Benson's incomparable photomechanical reproductions. Their writing is intriguing and the images lovely, as expected.
Amazon.com Review
Though the title is A Maritime Album, this book is less about the sea than about man's perceptions of it, as expressed through photographs. Authors John Szarkowski and Richard Benson have collected 100 photos taken between the years 1859 and 1956, all concerning some aspect of boats, boat building, and maritime life: the exuberance of a boat christening in 1900 and the eerie foreignness of arctic whalers in 1882, for example; shipwrecks and shipbuilders abound, and many of the photographs--those from the 19th century, especially--focus on the skin and bones of the trade, from the rotting shells of abandoned boats to the boilers and propellers of ships in the making.

The camera's subject might have been the sea, but the book is about so much more. Szarkowski, the former director of the photography department at the Museum of Modern Art, has selected each of these photos as much for what they say about humanity's relationship to the sea as for the artistry of the pictures themselves. Richard Benson's commentary, meanwhile, speaks of technology, the futility of war, and the effects of mass production, as well as a wealth of information about maritime life. More than just a coffee-table book, A Maritime Album offers plenty of food for thought about the sea and the place it occupies in our lives and dreams.