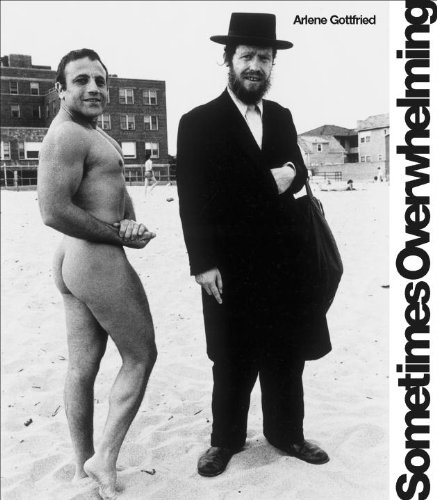 Sometimes Overwhelming
by Arlene Gottfried
Publisher's Description
'Arlene Gottfried is a photographer with an eye and a mind on the city streets—an ‘insider’ with an ability to capture images of life that are raw, real, hard-edged, and caustic, and at the same time affectionate, funny, and loving.' -Ann Marie Rousseau, Photo Review

Before gentrification, New York City was a gritty and inspiring place. And in its midst was Arlene Gottfried, whose eye for the sublime caught it all. Sometimes Overwhelming, her second powerHouse Book, is a manic yet romantic ode to the people of New York City in the 1970s and 80s. From Coney Island to a Hasid at Riis Beach’s nude bay to the disco nights of sexual abandon and the children in the original Village Halloween parade, Sometimes Overwhelming is a delightfully lighthearted look at the most outrageous people you might ever see.

Arlene Gottfried was born in Brooklyn and graduated from the Fashion Institute of Technology in New York. She has freelanced for top publications, including The New York Times Magazine, Fortune, Life, and The Independent in London. Gottfried has also exhibited at the Leica Gallery in New York and Tokyo and at the Smithsonian Institution in Washington, D.C., among others. Her photographs can be found in the collections of the Brooklyn Museum of Art, The New York Public Library, and the Maison Européenne de la Photographie in Paris. She is the recipient of numerous awards including the Berenice Abbott International Competition of Women's Documentary Photography. Gottfried is the author of Midnight (powerHouse Books, 2003) and The Eternal Light (Dewi Lewis Publishing, 1999). Gottried lives and works in New York City.
ISBN: 1576873714
Publisher: powerHouse Books
Hardcover : 120 pages
Language: English
Dimensions: 10.1 x 11 x 0.9 inches