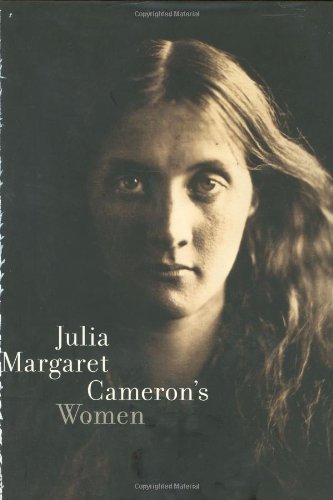 Julia Margaret Cameron's Women
by Stephanie Lipscomb
Amazon.com Review
Julia Margaret Cameron's women are, in a word, lovely. The 19th-century photographer was best known in her lifetime for her portraits of such major figures of the era as Robert Browning, Thomas Carlyle, Charles Darwin, Henry Wadsworth Longfellow, and Alfred Tennyson--many of whom were her friends and neighbors on England's Isle of Wight. But her rich images of women, which convey a wide range of real emotion and experience rarely openly expressed during the Victoria era, are arguably her strongest, most important works. Taking themes from the Bible, mythology, literature, and Renaissance painting, Cameron modeled the women around her--friends, servants, relatives--as Ophelia, Juliet, Queen Esther, Rachel, A Bacchante, Guinevere, and Mary, among others. Julia Jackson, the photographer's niece and future mother of Virginia Woolf, was Cameron's favorite model--and the one woman Cameron always cast as herself, titling one 1867 image My Favorite Picture of All My Works. My Niece Julia. Cameron's softly lit, unsmiling women with unpinned hair are full of sensuality, longing, sadness, and beauty. Their powerful emotions fill the dark shadows and diffused backgrounds of their portraits.

The plates for the book were borrowed from collectors around the world and reproduced on creamy, heavy stock that does fair justice to the original albumin prints. As Cameron was less concerned with technical exactitude than the essence of the image, the blurring brought on by a model's movement or insufficient light is faithfully maintained, serving to heighten the mystery and allure of the images. Three essays by noted art historians place Cameron and her work in historical and social context. And appendices offering biographical data on the models and a reproduction of Cameron's original price catalog are a substantive complement to the photographs. Julia Margaret Cameron's Women is an excellent example of an expertly conceived and beautifully executed artist monograph. --Jordana Moskowitz

Publisher's Description
Julia Margaret Cameron was a pioneer of photography and one of the great portrait photographers of all time. She photographed many of the major figures of the nineteenth century, including Tennyson, Darwin, Robert Browning, and Longfellow. The bulk of her work, however, consists of portraits of women. This stunning book is the first to concentrate on this central aspect of Cameron's work, providing new information and insights about one of photography's most visionary practitioners.

Using dramatic lighting and a soft-focus lens, Cameron made mesmerizing psychological portraits that exhibit an intensity of emotion not often publicly revealed in Victorian society. Her portraits of women are variously defiant, forthright, melancholy, or languidly sensual, offering, when seen together, an unexpectedly complex view of the photographer and her time.

The superb photographs, reproduced here in color and duotone, are complemented by an engrossing text. There are three essays: one by Sylvia Wolf on the artist and her work; another on the literary culture of Cameron's time by Phyllis Rose; and a third on Cameron's photographic illustrations of Tennyson's epic poem Idylls of the King by Debra N. Mancoff. The book also includes biographies of Cameron's female sitters by Stephanie Lipscomb, a short essay on the sale of Cameron's work, and an appendix on Cameron's mythological and literary subjects their significance to the Victorians.