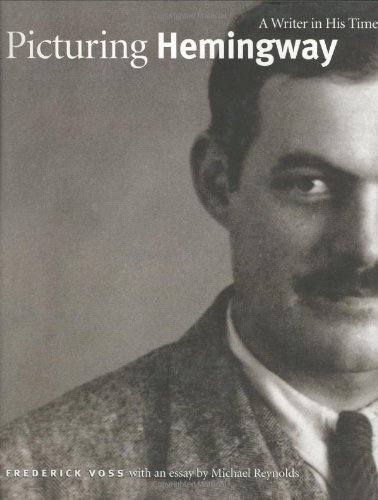 Picturing Hemingway: A Writer in His Time
by Mr. Frederick Voss
Publisher's Description
With private photographs, professional portraits by Karsh, among others, and various essays exploring his life, works, and the images. Picturing Hemingway is the companion to a travelling exhibition of the same name.
Amazon.com Review
He wrote some of the best and most influential American prose of the 20th century. But even a cursory look at the marvelous photos, drawings, and paintings assembled for a National Portrait Gallery exhibition honoring Ernest Hemingway's centennial reminds readers that the author's enduring fame has at least as much to do with his riveting good looks, virile charisma, and macho lifestyle. This book of photos is buoyed by intelligent essays by curator Frederick Voss and Hemingway biographer Michael Reynolds that serve as cogent minibiographies of the man. They cover all the salient points: the great fiction, from The Sun Also Rises to The Old Man and the Sea; the four wives, subservient Hadley Richardson and Mary Welsh and Martha Gelhorn, the feminist exception; the energetic outdoor and public life that couldn't stave off bouts of depression that prompted his suicide in 1961. All the famous pictures are here: the 1934 shot of a cocky, mustachioed Hemingway kneeling with the horns of his kill from an African safari. The classic 1957 Karsh portrait of the writer as bearded éminence grise in a turtleneck sweater. But he isn't visible in the most haunting of all--a photo of his funeral, with a small group of mourners huddled against desolate hills and a pitch-black Idaho sky--an image whose existential starkness equals that of Hemingway's masterpieces. --Wendy Smith
ISBN: 0300079265
Publisher: Yale University Press
Hardcover : 127 pages
Language: English
Dimensions: 9.2 x 11.1 x 0.8 inches