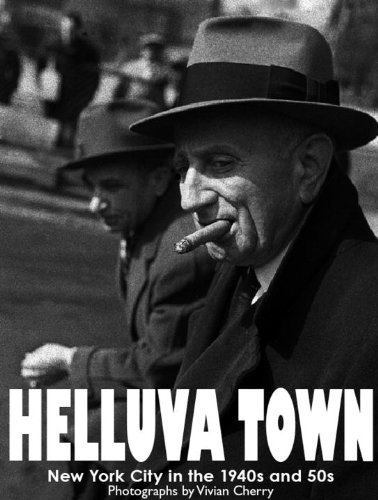 Helluva Town: New York City in the 1940s and 50s
by Vivian Cherry
Publisher's Description
At the end of World War II, New York City went through a period of transformation, as war rations gave way to prosperity, loved ones were reunited, and babies were born into a new era. African American soldiers who fought in the name of democracy demanded equal rights at home while Billie Holiday reminded us of the Strange Fruit this country had given birth to. Women left the factories and returned to the domestic front, raising children and catering to their husbands who toiled in a pre-technological lifestyle that has long since disappeared.

Photographer Vivian Cherry began her career in the early 1940s while working as a dancer in Broadway shows and nightclubs. Cherry supported herself partly as a “darkroom technician” for Underwood and Underwood, a prominent photo service to news organizations. She began shooting the world around her during this time of change. As a street photographer she combined informal portraiture with cityscapes of the Lower East Side, the Third Avenue El (and it’s ensuing demolition), the streets of Harlem, Hell’s Kitchen, and the Meat Packing District.

Searching for more skill as a photographer, Cherry joined the Photo League, where she studied with Sid Grossman, who had a profound influence on countless photographers of the 1940s and 1950s. Cherry began selling photo essays to popular magazines while continuing to work in Broadway musicals and supper clubs. Her work from this period, collected here for the first time in Helluva Town, provides lively vignettes of our collective memory, suffusing gritty street scenes with warmth and gentleness alongside social consciousness and history.
ISBN: 1576874044
Publisher: powerHouse Books
Hardcover : 100 pages
Language: English
Dimensions: 8.5 x 11 x 0.7 inches