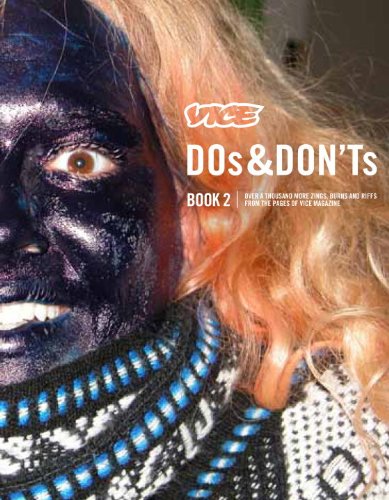 VICE DOs & DON'Ts 2: 17 Years of Street Fashion Critiques
by The Editors of Vice Magazine
Publisher's Description
'Nice purple track pants you fat bitch' is how Vice describes an infant out for a daily stroll with her parents. The girl is a DON’T even though she had nothing to do with dressing herself and luckily, will never be the wiser.

Next, we have a potato chip logo that features Humpty Dumpty leaning on a counter. The caption says, 'Dude is just chilling. He’s unflappable. You could be like, ‘Humpty, what if nobody shows up to our party?’ and he’d be all, ‘Don’t worry about it doood.’' This DO became so popular with the Vice readership one even had Humpty tattooed on his arm next to the word 'Unflappable.'

Vice Magazine’s DOs & DON’Ts started out as a way to appease clothing advertisers that were discouraged by Vice’s lack of fashion content. The feature snowballed completely out of control and has now come to define Vice more than anything else. The New York Times calls it 'genius,' The Onion says, 'spot-on,' and Maxim insists it’s 'impossible to put down.' There is a rabid fan base of readers who hold DON’T parties and dress as various favorites (the purple track pants 'bitch' being the most popular by far).

The first volume, DOs & DON’Ts: 10 Years of Vice Magazine’s Street Fashion Critiques, has already sold over 50,000 copies and a broadband version of the show called DOs & DON’Ts & FRIENDs boasts such guest stars as Johnny Knoxville, Jimmy Kimmel, Sarah Silverman, David Cross, and even Rip Taylor, all of whom will be contributing their own DOs & DON’Ts to the book. How such ridiculous fashion commentary grew to be so popular is a complete mystery to everyone involved but, at almost twice the size, this second book of all-new entries is likely to quench America’s DOs & DON’Ts thirst for at least a week.
ISBN: 1576874095
Publisher: VICE Books
Paperback : 336 pages
Language: English
Dimensions: 7 x 9 x 0.6 inches