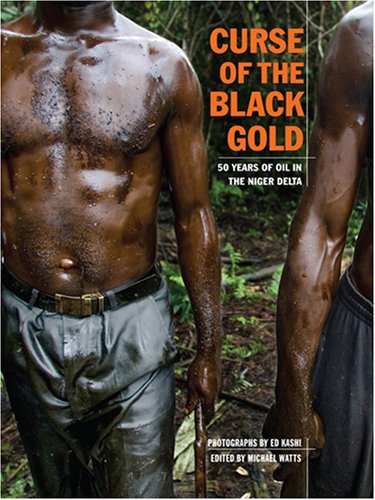 Now one of the major suppliers of U.S. oil, Nigeria is the sixth largest producer of oil in the world. Set against a backdrop of what has been called the scramble for African oil, Curse of the Black Gold is the first book to document the consequences of a half-century of oil exploration and production in one of the world’s foremost centers of biodiversity. This book exposes the reality of oil’s impact and the absence of sustainable development in its wake, providing a compelling pictorial history of one of the world’s great deltaic areas. Accompanied by powerful writing by some of the most prominent public intellectuals and critics in contemporary Nigeria, Kashi’s photographs capture local leaders, armed militants, oil workers, and nameless villagers, all of whose fates are inextricably linked. His exclusive coverage bears witness to the ongoing struggles of local communities, illustrating the paradox of poverty in the midst of plenty. The publication of Curse of the Black Gold occurs at a moment of worldwide concern over dependency on petroleum, dubbed by New York Times journalist Thomas Friedman as 'the resource curse.' Much has been written about the drama of the search for oil—Daniel Yergin’s The Prize and Ryszard Kapuscinski’s Shah of Shahs are two of the most widely lauded—but there has been no serious examination of the relations between oil, environment, and community in a particular oil-producing region. Curse of the Black Gold is a landmark work of historic significance.

Ed Kashi was born in New York City and received a degree in photojournalism from Syracuse University. Kashi’s first major documentary project, a study of the Protestant community in Northern Ireland, garnered him an NEA grant. His book When The Borders Bleed: The Struggle of the Kurds (Pantheon, 1994) was the result of his cover story for National Geographic. Kashi has received numerous awards, including the World Press and Pictures of the Year competitions. The author of Aging in America: The Years Ahead (powerHouse Books, 2003), Kashi has also published his work in National Geographic, The New York Times Magazine, Time, Fortune, Geo, Smithsonian, Newsweek, Natural History, U.S. News & World Report, The Atlantic Monthly, Audubon, Granta, Aperture, and American Photo, among others. Kashi lives in New Jersey.

Michael Watts is Chancellor’s Professor and Director of African Studies at the University of California, Berkeley. His writing on the Niger Delta has been widely published, and he received a Guggenheim Fellowship in 2001 to conduct research on oil in Nigeria.