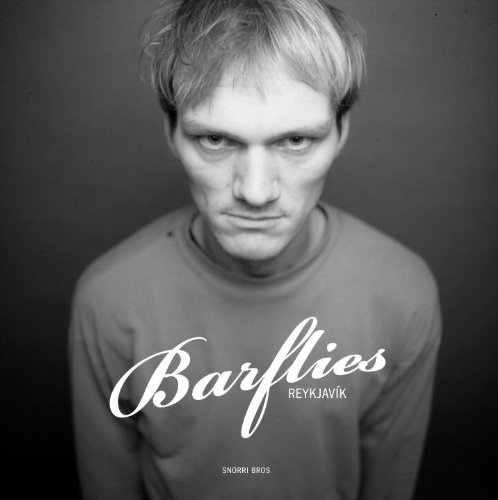 Barflies: Reykjavik
by The Snorri Bros
Publisher's Description
In 1993 in Reykjavík, Iceland, a bar named Kaffibarinn Frikki & Dýrið opened its doors to the public. It was a small place on two floors, in a modest old corrugated iron house on a side street near Reykjavík’s main shopping drag. In its first year, the electric atmosphere at this bar became the source of legends, and Kaffibarinn (as it was commonly known) became the epicenter of Iceland’s Gen-X. The people portrayed in Barflies: Reykjavík are the Kaffibarinn regulars, the people who made up the scene: 'Bartenders, musicians, actors, actresses, writers, models, entrepreneurs, photographers, computer geeks, students, filmmakers, artists, and some just plain old barflies with nothing much to report.'

All of the portraits were shot within a short time period, and each subject was shot only once. All of the pictures are framed in the same way, shot with the same camera, the same lens, and the same film, against the same background, with the same lighting. The camera used was an old Hasselblad with a Polaroid back, which the Snorri Bros decided not to clean; this only increased the charm of the resulting images.

The pictures in the book originally appeared in an exhibition in Reykjavík in April of 1994, to favorable reviews. Since then they have scarcely seen the light of day, until now.
ISBN: 1576874419
Publisher: powerHouse Books
Hardcover : 112 pages
Language: English
Dimensions: 0 x 0 x 0 inches