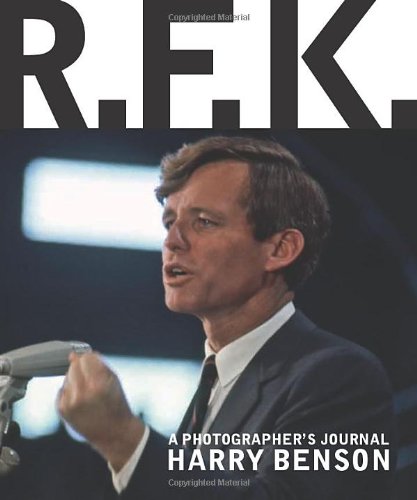 RFK: A Photographer's Journal
by Gigi Benson
Publisher's Description
A world-renowned photojournalist and chronicler of the twentieth century’s most historic events, Harry Benson provides an eyewitness account of Robert F. Kennedy’s campaign for the presidential nomination in RFK: A Photographer’s Journal.

As a friend, advisor, and attorney general to his brother, John F. Kennedy, Bobby Kennedy stood at the heart of Washington politics. He is remembered today as a compassionate, articulate, and optimistic man—a friend to the poor, an avid civil rights advocate, a champion for peace. Harr y Benson’s images capture unprecedented intimate family outings and outdoor adventures with friends alongside every moment of Kennedy’s brief but unforgettable presidential run, from his announcement of his candidacy on St. Patrick’s Day, 1968, and the fervor and excitement of his days on the campaign trail, all the way through his shocking assassination in Los Angeles and the long, sweltering funeral procession to Arlington Cemetery. Here in elegant photographs are glimpses of the exhilarating successes and challenging setbacks of RFK’s campaign, the chaos of that fateful night in L.A., and the mourning of hundreds of thousands after their hero was struck down. Released in commemoration of the 40th anniversary of Kennedy’s death, and supplemented with excerpts from his speeches and from Benson’s own journals, RFK: A Photographer’s Journal is a fitting tribute to an extraordinary man and the legacy he left behind.
ISBN: 1576874508
Publisher: powerHouse Books
Hardcover : 144 pages
Language: English
Dimensions: 10 x 12.2 x 0.8 inches