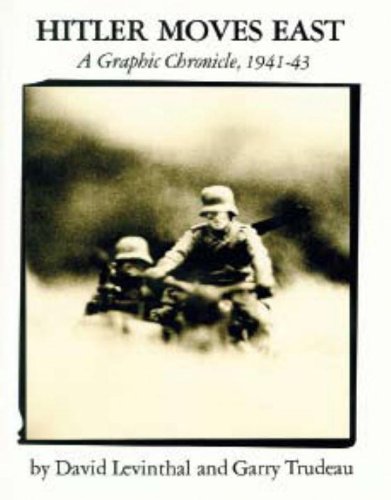 Hitler Moves East: A Graphic Chronicle, 1941-43
by David Levinthal
Publisher's Description
Produced during the final phase of the Vietnam War, Hitler Moves East: A Graphic Chronicle, 1941–43 was first released in 1977, presenting a powerful restaging of events from World War II that remains just as poignant today. Having sold out all but 800 copies, this piece of historical mock-documentary is now available from powerHouse Books.

To a child with toy soldiers and a few tanks, the imagination creates the reality of war. In the hands of two graphic innovators, David Levinthal and Garry Trudeau, the elements of childhood are transfigured into astonishing and sometimes horrifying images. Combining selected archival materials with their own meticulously constructed miniature settings, the authors have provided a haunting recreation of World War II’s most dramatic campaign—the German invasion of the Soviet Union. What emerges from their story is a special sort of truth born of contrast; a visual history told in terms of uncommon contradictions. Traveling precariously between imagination and reality, Levinthal and Trudeau have produced a work which is at once a sublime graphic manifesto and a powerful documentary of men at war.
ISBN: 1576874524
Publisher: powerHouse Books
Hardcover : 96 pages
Language: English
Dimensions: 0 x 0 x 0 inches