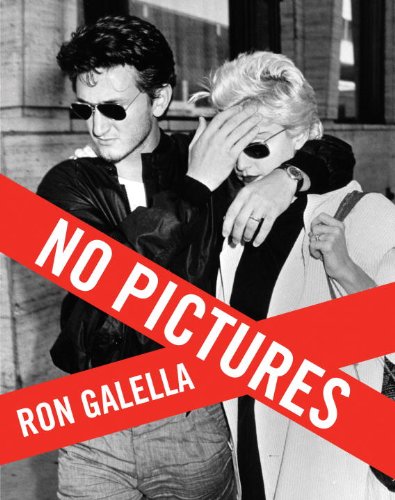 No Pictures
by Ron Galella
Publisher's Description
Ron Galella didn’t invent the word paparazzo—Italian for a buzzing mosquito—but he certainly personalized it by redefining the relationship between the movie star and the photographer. Now in the business of catching public figures in private moments for more than three decades, the nation’s most famous celebrity photojournalist presents the next chapter in his ongoing visual diary of fame, wealth, and success in America.

In No Pictures, Galella’s second powerHouse monograph and the follow-up to the 2006 smash hit Disco Years, confrontation takes the forefront. Just as famous today as Galella’s images of a windblown, jeans-wearing Jacqueline Onassis is the legal battle that ensued; in a trial that lasted 26 days and made the cover of Life magazine, Onassis sued Galella and secured a restraining order against him. He has run afoul of Sean Penn, Richard Burton, Marlon Brando, Sam Shepard, and countless other stars, not to mention Studio 54 owner Steve Rubell—who eventually banned him from the club—and legions of angry bodyguards. No Pictures chronicles these conflicts and Galella’s relentless persistence in the face of it all, even when things got violent (as with Brando, who once landed a punch that broke the photographer’s jaw and five of his teeth). Driven by a mad curiosity and a dogged insistence that the lives of celebrities are fair game for one and all, he has continued to take risks and make enemies in service of getting the perfect shot. The stars may shout “No pictures!” but Galella refuses to take no for an answer.
ISBN: 1576874575
Publisher: powerHouse Books
Hardcover : 212 pages
Language: English
Dimensions: 9.9 x 12.4 x 0 inches