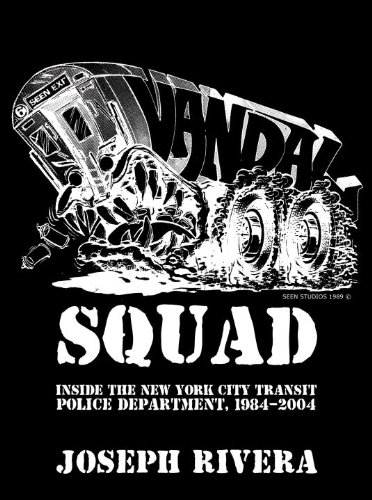 Vandal Squad: Inside the New York City Transit Police Department, 1984-2004
by Joseph Rivera
Publisher's Description
Graffiti writers have left a vivid trail and told their spellbinding tales the world over in countless books and magazines, films and videos, websites and events. They have shared stories of war and glory, of battles and triumphs, and have the pictures to prove it. But many have gone down for those ups; they’ve been caught in action or hunted as criminals, and brought forth to answer for crimes of vandalism. They’ve copped pleas or pleaded guilty outright; they’ve been sentenced to do community service, to pay fines, and sometimes even to serve jail time—yet more often than not they got right back in action. No one knew this better than the New York City Transit Police Vandal Squad.

Founded in 1980, the Vandal Squad’s mission was to protect the subway system from hardcore criminal acts of destruction like kicking out windows and throwing seats out of train cars. It was only with the Clean Car Program of 1984 that graffiti became the primary focus of this specialized Unit. On a mission to catch those who gained fame under tag names, the Vandal Squad had to identify and locate these individuals cloaked in anonymity (and often so transient they were referred as “ghosts”) using every means available, including the NYPD computer database, search warrants, subpoenas, and even vandals themselves.

In Vandal Squad: Inside the New York City Transit Police Department, 1984–2004, former member Officer Joseph Rivera recounts the days and nights spent in pursuit of some of New York City’s most notorious vandals. The only book on graffiti told from the perspective of law enforcement, Vandal Squad takes us inside the New York Police Department. Rivera’s fastpaced tales of cat and mouse are presented alongside shocking displays of professional disregard within the Department. Featuring never-before-seen photographs and stories of graffiti’s infamous Top 40, Vandal Squad offers an unprecedented look at the graffiti world from the other side of the game.
Amazon.com Review
Amazon Best of the Month, November 2008: Graffiti writers have become a pop culture fixture, and their outlaw mystique has helped spark a cottage industry of books devoted to their work. But as Robert DeNiro said in Heat, "There is a flip side to that coin." In Vandal Squad, Bronx-born Joseph Rivera chronicles his cat-and-mouse police work putting away many of the perps on New York City's Top 40 Vandal List: "Just seeing their faces when they turned and realized they were about to get bagged was priceless." In Warriors-era '70s New York, subway trains became a playground for vandals, and in 1980 the New York City Transit Police Vandal Squad was formed to combat these attacks with creative undercover work. Rivera's voice is authentically gruff in a just-the-facts-please style, but many surprises pop up throughout (he enlisted a popular tagger to design the logo for the Vandal Squad softball team jerseys). Rivera's work, coupled with Rudy Guiliani's zero-tolerance "Quality of Life" regime in the '90s, cleaned up (or as some might argue, removed character from) the subways and city streets, but Vandal Squad takes you back to a much grittier Manhattan. --Brad Thomas Parsons
ISBN: 1576874664
Publisher: powerHouse Books
Hardcover : 168 pages
Language: English
Dimensions: 7.4 x 9.8 x 0.8 inches