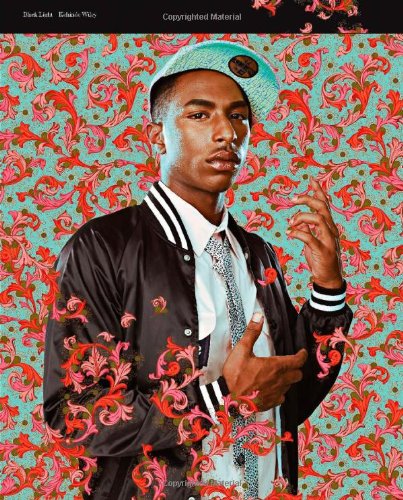 Black Light
by Brian Keith Jackson
Publisher's Description
Los Angeles native and New York-based visual artist Kehinde Wiley has firmly situated himself within art history’s portrait painting tradition. As a contemporary descendent of a long line of portraitists—including Reynolds, Gainsborough, Titian, Ingres, and others—Wiley engages the signs and visual rhetoric of the heroic, powerful, majestic, and sublime in his representation of urban black and brown men found throughout the world. By applying the visual vocabulary and conventions of glorification, wealth, prestige, and history to subject matter drawn from the urban fabric, Wiley makes his subjects and their stylistic references juxtaposed inversions of each other, imbuing his images with ambiguity and provocative perplexity.

In Black Light, his first monograph, Wiley’s larger-than-life figures disturb and interrupt tropes of portrait painting, often blurring the boundaries between traditional and contemporary modes of representation and the critical portrayal of masculinity and physicality as it pertains to the view of black and brown young men. The models are dressed in their everyday clothing, most of which is based on far-reaching Western ideals of style, and are asked to assume poses found in paintings or sculptures representative of the history of their surroundings. This juxtaposition of the “old” inherited by the “new”—who often have no visual inheritance of which to speak—immediately provides a discourse that is at once visceral and cerebral in scope.