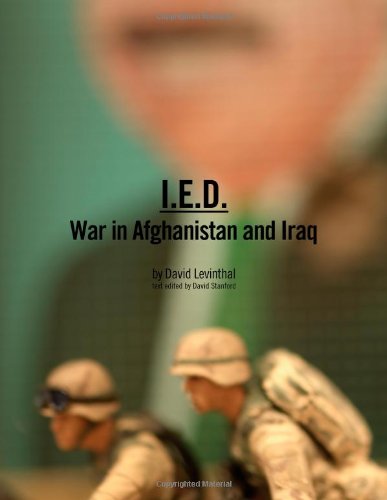 I.E.D.: War in Afghanistan and Iraq
by David Stanford
Publisher's Description
Dealing with war in any context is always a difficult and often problematic venture. In I.E.D., acclaimed photographer David Levinthal uses toy soldiers and plastic Humvees to attempt to explore and understand the ongoing conflict in Iraq.

Why simulate a war with toys when it is already so familiar to us through daily news broadcasts, and so well documented by photojournalists and soldier-generated cell-phone imagery? In part is it because this book is not just a recreation of the war in Iraq; it is also a commentary about our society and how it is imaging and imagining a war through the use of such direct and immediate signifiers. Never before has there been an instance of such a massive production of toys directly related to a current and unresolved conflict.

Levinthal has always viewed toys as both an abstraction and as a tool by which a society and a culture socializes itself. The choice of which and what kind of toys are created, how they are posed, and what they are attempting to represent reflects assumptions about a society’s views. I.E.D. is an attempt to look at these questions using the canvas of the war in Iraq, and the new and frightening aspects of this conflict. The acronym I.E.D. (improvised explosive device), unknown to most until just a few years ago, is now a part of our daily vocabulary. By abstracting what is already distant and foreign, Levinthal brings a new perspective to the discourse about this war, going beyond reality to create a new and perhaps more immediate presence.
ISBN: 1576874885
Publisher: powerHouse Books
Hardcover : 96 pages
Language: English
Dimensions: 0 x 0 x 0 inches