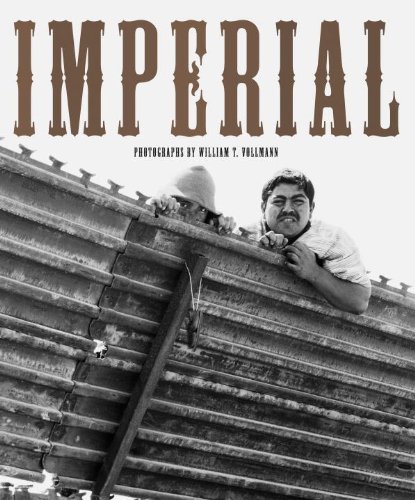 Imperial
by William T. Vollmann
Publisher's Description
The Imperial Valley of southeastern California and the U.S./Mexico border is a place with a heavy history and an uncertain future. It is a land of great progress and crushing failure, home to a past that includes migrant workers, Mexican laborers, struggling farmers, corporate exploitation, pollution, the forgotten paradise of the Salton Sea, and underground tunnels that housed illegal Chinese immigrants, brothels, and gambling dens. Even at the turn of the twentieth century, few settled in the Imperial Valley because of its hot desert climate and lack of water. In 1901, the Imperial Land Company recognized the area’s soil potential and diverted the waters of the Colorado River to it, in effect transforming wasteland into productive farmland. Named for the corporation that brought it to life, the Imperial Valley, its surrounding regions (including the Coachella and Mexicali Valleys), and the people who live there are the subjects of the latest work by acclaimed author and now published photographer William T. Vollmann (who will release an epic nonfiction book about the area with Viking in 2009). “It’s an incredible area, teeming with secrets and the tension of the border,” says Vollmann of his first pictorial work. “It’s that tension that gives the place its meaning.”

Imperial is a study of a people and place on the margins, familiar territory for its author. Through his exploration, Vollmann uncovers the people and their struggles, which have been so easily pushed aside. It’s a photographic portrait of the Valley’s last decade, in which Vollmann’s pictures provide a visual identity to those who call it home. They have suffered and flourished amidst a landscape that is both breathtaking and heartbreaking, alluring and repelling.
Amazon.com Review
Amazon Best of the Month, August 2009: How do you describe a 1,300-page book in 150 words? Start with adjectives (some of them opposites): vast, intrepid, passionate, and yes, sometimes dull, illuminating and infuriating, satirical and confessional, exhausting and exhaustive, dirty, fertile, and dry. William T. Vollmann, legendary for his huge, all-consuming books of fiction, history, and reporting, has spent much of the past ten years returning obsessively to one of the harshest but most contested territories in North America, the desert borderlands of southeastern California and northern Mexico he calls Imperial. Wading through water-use arcana, agri-booster archives, and centuries of colonial history; listening to lettuce farmers, motel clerks, and dance-hall hostesses; and crossing the border hundreds of times (while meeting those who cross via other means, and those who try to stop them), Vollmann has written an intensely personal fever dream of an encyclopedia that makes a strange, northern companion to last year's giant borderlands masterpiece, Roberto Bolano's 2666. --Tom Nissley
ISBN: 1576874893
Publisher: powerHouse Books
Hardcover : 224 pages
Language: English
Dimensions: 10.2 x 12.4 x 1.1 inches