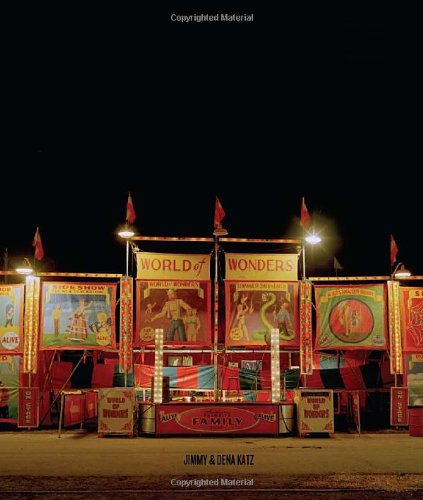 World of Wonders
by Jimmy Katz
Publisher's Description
Working in brilliant color and with a large format camera, photographers Jimmy and Dena Katz spent three seasons following the last authentic traveling side show in America to create this elegy to a uniquely American art form. Their powerful, poignant, and respectful portraits of aging performers and young recruits reveal disappointment, despair, and tenacity played out against the tawdry glitter of the fairground. These images, along with anecdotes and commentary by the performers, are brought together for the first time in World of Wonders.

Sword swallowers, fire eaters, freaks, and illusionists have excited generations of Americans. Today, only this one troop persists, led by the legendary Ward Hall and his partner Chris Crist, who mounted multiple extravaganzas for Ringling Brothers more than fifty years ago. As the photographers listened to hard-luck stories and felt the power of hard-lived lives, they were moved by these men and women who continue to perform despite changing times and tastes.

The Katzes’ widely acclaimed book about the surreal effects of human action on the salt flats of Utah, Salt Dreams (powerHouse Books, 2006), featured images deemed “spectacular” by New York Times critic Grace Glueck. With this powerful and unsettling new work, Jimmy and Dena Katz continue to explore the postmodern aesthetics of American subcultures. Born in New York City, photographer Jimmy Katz spent more than a decade based in Utah as a mountaineer and Nordic skier, photographing the desert and mountainous terrain. He often contributed photographs and articles to climbing publications about his expeditions and first ski descents in remote areas of the world. Back in New York, he established himself as a well-known music photographer, shooting over 250 recording projects and more than 60 Jazz magazine covers. Although he lives in New York City, Katz is still closely connected to the American West, where he often finds inspiration for his personal projects. Dena Katz was born and educated in Moscow, in the former Soviet Union. She met Jimmy Katz during his expedition to the Soviet Pamir, and their relationship developed after she had climbed the highest peak in Europe. Shortly thereafter, she moved to the United States and pursued post-graduate East Asian studies at Columbia University. She has been a conceptualist and collaborator with Jimmy Katz on a number of photographic projects.
ISBN: 1576874923
Publisher: powerHouse Books
Hardcover : 84 pages
Language: English
Dimensions: 10.8 x 12.8 x 0.6 inches