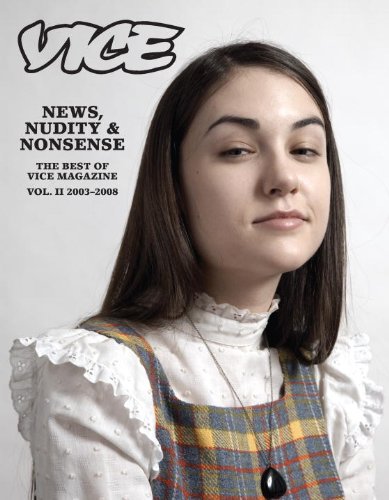 News, Nudity & Nonsense: The Best of Vice Magazine Vol. II 2003-2008
by The Editors of Vice Magazine
Publisher's Description
The Vice Guide to Sex and Drugs and Rock and Roll was a best-of book culled from everything published in Vice Magazine from its inception in 1994 up until 2003. The original manuscript was discovered amidst a verdant glade in a glowing golden box. The first men to gaze upon it had their faces melted off by its brilliance. It rocketed to the tops of best-seller lists and dollar bins. It has been bequeathed in wills from parents to children. It has supplanted Dianetics as the must-have spiritual tome of Hollywood, California. It is truly the book of the ages.

But all of that is total bullshit compared to the tidal wave of press and accolades that will engulf all of us when we bringeth forth upon the world the second book of greatest hits from Vice Magazine. It is to be called News, Nudity & Nonsense, and will contain enough “wow”-filled reading material to power you through at least a year’s worth of defecations from its inevitable home atop the back of your toilet.

See, here’s the thing about Vice Magazine since 2003: we got even better than we were before. We integrated a newfound interest in the world and the people who live in it with our previous stories of poop and pee. We started doing heavy news stories from all over the planet—real-deal journalism that can stand up next to any mainstream dinosaur of a magazine. We also began to publish a yearly fiction issue, running work by both venerable heroes and kids nobody has heard of yet but everyone will love in a year. Amidst the trademark heartfelt screeds regarding screwing and bodily functions, we published legitimate scoops from places as far flung as Russia, Burma, Appalachia, Antarctica, Pakistan, and New Jersey. We published an issue that was entirely written by Iraqi citizens living in the midst of the war. We practiced immersive journalism everywhere from poverty-stricken Indian reservations to leper colonies in Nepal. And yet we never stopped keeping up with new music, weird art, and good fashion. How do we pull it off? We don't know. It’s a mystery. Ask God, maybe she can tell you.

But seriously folks, we’re really, really proud of the last five years of Vice magazine and, if you have a pulse, this book will knock your socks out the back of your ass. Thanks for your time.
ISBN: 1576875024
Publisher: powerHouse Books
Paperback : 304 pages
Language: English
Dimensions: 7 x 9 x 0 inches