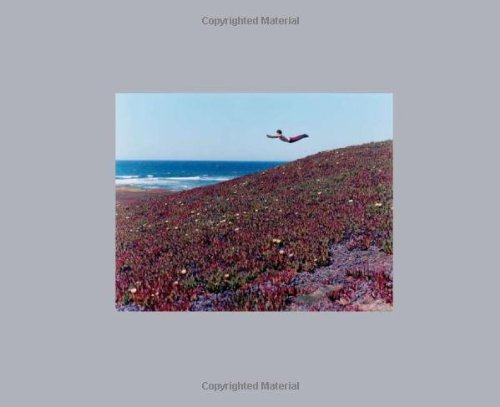 Flying Pictures
by Daniel Gordon
Publisher's Description
Between 2001 and 2004, on the snowy fields in New York's Hudson Valley and the rocky coasts of the Bay Area in Northern California, photographer Daniel Gordon learned to fly—if only for 1/125 of a second. Using a camera mounted on a tripod, Gordon frames his picture. He then runs out onto the landscape and launches himself into the air, while an assistant snaps the shutter. The images in Flying Pictures are at once pastoral landscapes and documents of a performance. Only after considering them for a while, does the thought occur that their fleeting bliss was swiftly met with physical doom—a crash back to Earth. Such a journey requires great humility as well as hubris, and a will to achieve the impossible if only for a moment. The project began at a time when digital technology was changing the role that truth has historically played in the media of film and photography. The ease with which one could now alter an image with Photoshop created a new sense of paranoia concerning the veracity of photographs. Flying Pictures’ unbelievable, unaltered images reveal that there never was just one truth in photography.
ISBN: 157687513X
Publisher: powerHouse Books
Hardcover : 56 pages
Language: English
Dimensions: 12 x 9.8 x 0.5 inches