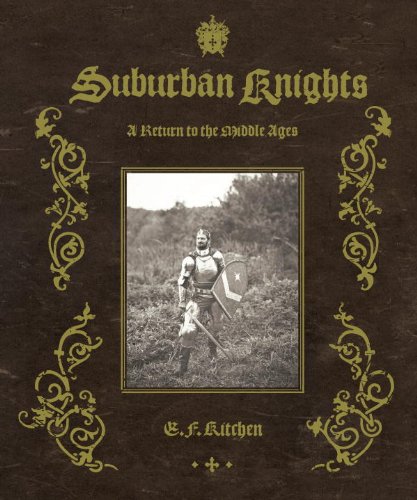 Suburban Knights: A Return to the Middle Ages
by E.F. Kitchen
Publisher's Description
Whether they’re bored office stiffs, housewives, or disgruntled war vets, the armor-clad members of the Society of Creative Anachronism (SCA) like to get beat up the old-fashioned way. Boasting more than 30,000 members worldwide, and over 16 “Kingdoms” in the United States alone, the eclectic eccentrics of the SCA participate in a variety of rigorous medieval battle simulations. Suburban Knights is a series of portraits of these 21st-century warriors, in costume and in character as their knightly alter egos.

From 2003 to 2005, internationally renowned photographer E. F. Kitchen photographed and interviewed the fighters of the SCA on location at their battles. Kitchen’s unique approach dispensed with technologically sophisticated cameras, and she instead used a tripod-mounted, 8 x 10 bellows camera with exclusively handmade and antique lenses. The results are appropriately hoary, sepia-tone images of these fierce warriors lost in time.

Suburban knights willfully escape from the 21st-century and into the realm of the SCA, where one can come face to face with the formidable armor and lance of a knight calling himself “Nissan Maxima.” Warriors are icons for an idealistic code of behavior extolling power and virtue. The men and women of the SCA capture a bit of this past glory for themselves, and while a majority of the portraits obscure the faces of these knights, under their thick armor, their features couldn’t be made more clear.
ISBN: 1576875369
Publisher: powerHouse Books
Hardcover : 96 pages
Language: English
Dimensions: 10.1 x 12.1 x 0.7 inches