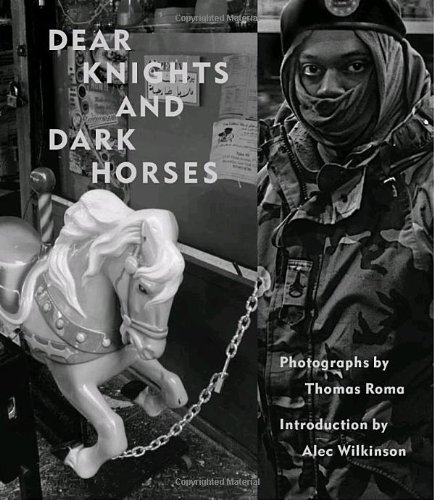 Dear Knights and Dark Horses
by Thomas Roma
Publisher's Description
Mechanical horses and departing soldiers are the two bodies of work that make up Dear Knights and Dark Horses, the latest powerHouse release by renowned fine art and documentary photographer Thomas Roma. There is a haunting elegance present in each series taken separately—in the peeling paint of the inactive rides, in the forlorn faces of men on the verge of the unknown—but taken together, the sense of unease present in the images resonates twice as clearly.

The portraits of soldiers were made in the early morning hours of January 2004, in the Jamaica, New York Armory as they were being deployed to the Iraq Theater of Operations. They are Army National Guardsmen of the 1st Battalion, 258th Field Artillery Regiment of the 42nd Infantry “Rainbow” Division. These are guardsmen, not army recruits. They have been called into service from lives spent not training for combat, but spent working everyday jobs and raising families. Roma portrays these men in a straightforward manner capturing their bravado as well as their apprehension in their final hours before beginning an unexpected voyage from which they might not return.

Coin-operated pony rides began appearing in front of “five and dimes” and candy stores across the U.S. in the late 1940s, and quickly became part of the retail landscape. Sitting unattended collecting coins, they offered children a chance to imagine they were riding Gene Autry’s Champion, the Lone Ranger’s Silver, or Roy Roger’s Trigger. The machines pictured here are long past their prime; riderless, their novelty long since faded. Roma manages to humanize these machines by finding their potential to represent loss, abandonment, and the obsolete—themes that have been intertwined with America’s returning soldiers since Vietnam.
Amazon.com Review

From Dear Knights and Dark Horses
Click on the images below to open larger versions.