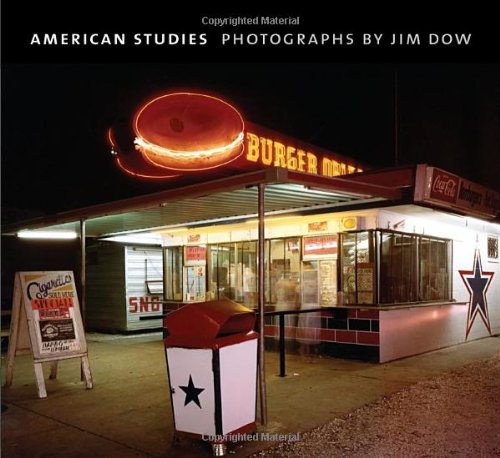 American Studies
by Jim Dow
Publisher's Description
Jim Dow’s American Studies presents a vision of America at once familiar and foreign; a country constantly reinventing itself visually, both discarding and preserving elements of its past, in a relentless, unplanned process of change.

In American Studies, Dow gives us unpeopled spaces, each resonating with a unique and telling history. A landscape, for Dow, is fashioned by ordinary individuals leaving their mark on their surroundings through everyday acts, unconscious of the enduring effect these changes have on our world. Our signs and billboards, barbershops, office buildings, libraries, pool halls, private clubs, courthouses, and motels—these places belong to a world made primarily by and for American men, and are naturally imbued with that identity.

Obsessive by nature, once praised as “dumb, in the honorific sense of the word,” Dow takes photographs that depict how Americans purposefully create environments and transform their aesthetic power—spiritually, historically, and sometimes commercially. His method has evolved from an early black and white directness, deeply influenced by photography greats Harry Callahan and Walker Evans, to richly detailed color studies of American vernacular culture. In these beautifully realized images, made in every corner of the United States over nearly 40 years of American travel, Dow catalogs aspects of American culture that are seemingly commonplace yet always astonishingly unique.
ISBN: 1576875652
Publisher: powerHouse Books
Hardcover : 136 pages
Language: English
Dimensions: 11 x 12 x 0.8 inches