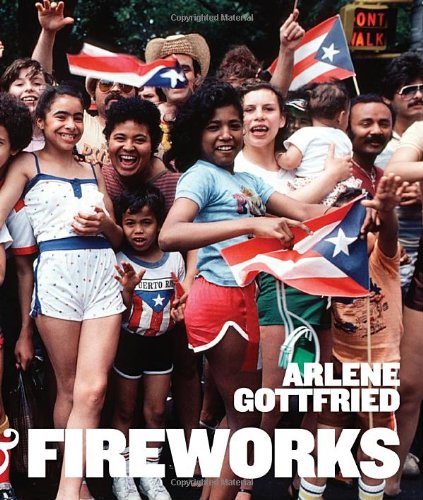 Bacalaitos and Fireworks
by Arlene Gottfried
Publisher's Description
New York City has been home to a Puerto Rican population since the mid-1900s, with the most noticeable migration boom beginning in the 1950s. As Puerto Ricans settled in New York over the years they stamped the city with their culture, indelibly altering neighborhoods like the South Bronx, the Lower East Side, Williamsburg, and downtown Brooklyn with rhythm, style, flavor, art, language, and claro, Latino cuisine.

Arlene Gottfried, herself a native New Yorker, grew up side-by-side with the burgeoning Puerto Rican community, never straying far from its influence whether living in Brooklyn or the LES. In the heart of the barrio, Gottfried began shooting pictures inspired by her bohemian friends and using them as subjects—in apartments, on the streets, and in the park, in times of radiant joy and heart-breaking sorrow.

Bacalaitos and Fireworks is Gottfried’s ode to Nuyorican life and style, from the 70s to the present, shot with an unfailingly lyrical eye and full of vibrant personalities: eccentric bad-boys, white-clad church-goers, an afro-sporting poet in a groovy leisure suit, a gambling grandpa with painted-on eyebrows and a cowboy mustache, and even your grandparents’ beloved, plastic-covered furniture.

This is the New York of broken televisions littered throughout the streets, burned-out abandoned buildings, neighborhood fiestas with pigs roasting on spits, and home to outcasts living in poverty. Gottfried offers first-hand testimony to the pain of alienation, neglect, drug addiction, and ultimately crime, prison, and death. But there is also evidence of the lively and intimate community that helps them overcome these obstacles.
ISBN: 1576875660
Publisher: powerHouse Books
Hardcover : 128 pages
Language: English
Dimensions: 9.1 x 10.4 x 0.7 inches