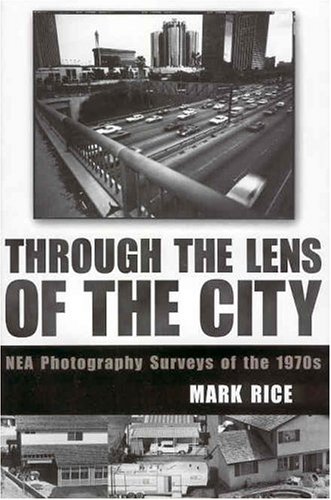 Through the Lens of the City: NEA Photography Surveys of the 1970s
by Mark Rice
Publisher's Description
During the 1970s, the National Endowment for the Arts Photography Surveys granted money to photograph American cities at the bicentennial and years that followed. In Through the Lens of the City: NEA Photography Surveys of the 1970s, Mark Rice brings to light this long-neglected photographic endeavor. From 1976 to 1981, the NEA supported more than seventy projects that examined a wide range of people and places in America. Artists involved included such well known photographers as Bruce Davidson, Lee Friedlander, and Joel Meyerowitz and many photographers who became widely known after their work with the surveys, such as Robert Adams, Joe Deal, Terry Evans, and Wendy Ewald. Rice argues that the NEA Photographic Surveys drew from two wells: a widespread sense of nostalgia and an intense public interest in photography. Looking at the works from eight key cities-Atlanta, Buffalo, Durham, East Baltimore, Galveston, Long Beach, Los Angeles, and Venice-the book uncovers marked differences as well as startling similarities in the concerns manifested by different photographers in far-flung places. Although the surveys are interesting both for their artistic merits and for their place in the history of American photography, they are equally important as a documentation of bicentennial-era America and a close examination of American cities. A major shift in the ideals of civil engineering and urban planning was underway in the 1970s. At the same time, ideas and theories about photography were changing along with our notions of what the city could and should be. These surveys, capturing American cities in a fascinating period of flux, show us American photographers matching artistry to subject matter in new and exciting ways.
ISBN: 1578067073
Publisher: University Press of Mississippi
Hardcover : 255 pages
Language: English
Dimensions: 6.3 x 9.2 x 0.9 inches