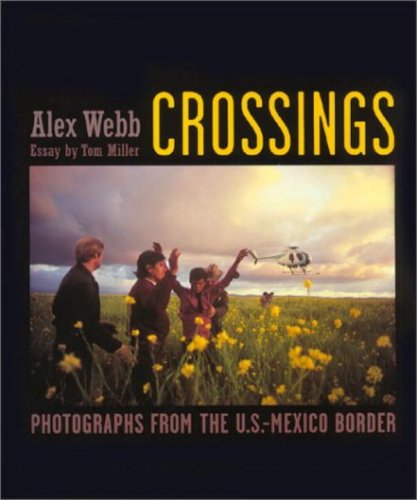 Crossings: Photographs from the U.S.-Mexico Border
by Alex Webb
Publisher's Description
The United States-Mexico border is neither the United States nor Mexico; it is rather a 'third country,' 10 miles wide and 2,000 miles long, that lies in between. This borderland, split by the Rio Grande and the border fence, is a place of transience and crossings - of people and goods as well as of ideas and beliefs. Noted photojournalist Alex Webb has spent decades covering the border. This collection of color images - introduced by a black-and-white portfolio - shows a terrain where cultural differences between the two countries are blurred, where industrialized efficiency meets spirituality, where wealth meets poverty, and all are transformed in the process. United States border towns - El Paso and Brownsville, Texas - rely on cheap Mexican labor, legal and illegal, and Mexican shoppers; communities on the Mexican side - Juarez and Matamoros - are dependent on North American tourism and United States-owned manufacturing plants. Webb’s photographs explore this complex, culturally rich borderland in views of Mexican migrants and American tourists, desolate villages and red-light, honky-tonk border cities. He also focuses on the various forms of smuggling - drugs and people heading north, electronic goods and guns going south - that have come to define the border. The photographer comments on many of the images in extended notes; an essay by noted writer - and Webb’s long-time friend and colleague - Tom Miller explores the concept of the border as a third country and its transformation over the past decades.
ISBN: 1580930964
Publisher: The Monacelli Press
Hardcover : 150 pages
Language: English