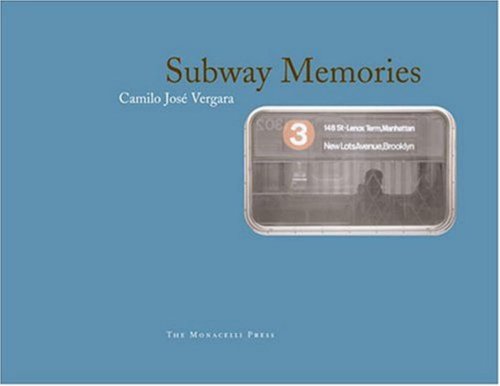 Subway Memories
by Camilo J. Vergara
Publisher's Description
Out in time to celebrate the centennial year of the New York City Subway, these compelling new monographs share the same subject, but take radically different approaches and thus compliment each other beautifully. In Subway Memories, Vergara offers a photographic study, entirely in color and almost archeological in its scope, with images of the subway from the 1970s until present. In a rich documentary style, he covers the subway from inside the trains and stations, and also provides a section on views of New York City from the subway, as well as views of the subway from New York City. He also shows us a rare glimpse inside the dispatcher's quarters and conductor's car. This monumental project is housed in a wonderfully unassuming, but finely designed and produced, clothbound book. Agou's Life Below, on the other hand, entirely in black-and-white and produced between 1997 and 2000, presents a moving, lyrical, and surprisingly personal portrait of the subway. These revealing images of fleeting acquaintances and proximity are often shot at such a close range, one marvels at the accomplishment, and sees in them something enduring and timeless. Hands on the pole, newspapers blowing on the ground as the train approaches, people in intense thought and conversation appear with a feeling of intimacy that pervades the entire project.
ISBN: 1580931464
Publisher: The Monacelli Press
Hardcover : 128 pages
Language: English
Dimensions: 8.9 x 7 x 0.8 inches