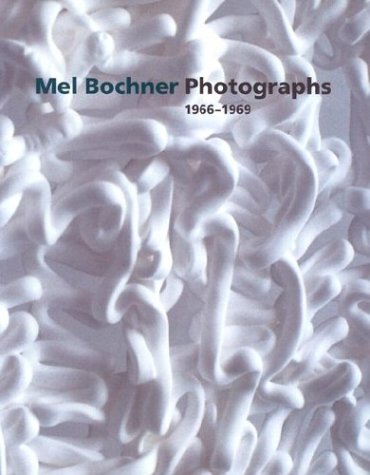 Mel Bochner (b. 1940) is considered a pioneer of the Post- Minimal and Conceptual art movements. Perhaps best known for his paintings, sculptures, and drawings, Bochner became deeply involved with photography in the mid- to late 1960s, although most of these works have only recently been exhibited. This significant book provides the first critical look at a virtually unknown body of Bochner's extremely varied photographs dating from 1966-1969. Some 75 of his photographs are presented, many in color and most published for the first time. Also included are a number of Bochner's drawings that directly informed his photographic works.

Scott Rothkopf explores the crucial role of photography in Bochner's artistic development as well as key issues in the relation of photography to Minimal and Conceptual art. In Bochner's photography, Rothkopf argues, a clear arc can be traced from his grappling with Minimalism toward a more rigorous and nuanced articulation of Conceptual art. Examining this shift, the author compares Bochner's work with that of other artists who were engaged with photography during this period, among them Robert Smithson, Sol LeWitt, and Bruce Nauman. For Bochner and others, Rothkopf concludes, photography was used as a response to the limits of minimal sculpture and helped make possible the birth of Conceptual art.

The book also features an essay by Elisabeth Sussman on the relevance of Bochner's 1966 film experiments to his later photographic projects.

This handsome volume accompanies an exhibition at the Harvard University Art Museums from 16 March to 16 June, 2002.

Scott Rothkopf is guest curator at the Harvard University Art Museums. Elisabeth Sussman is an independent scholar and curator.