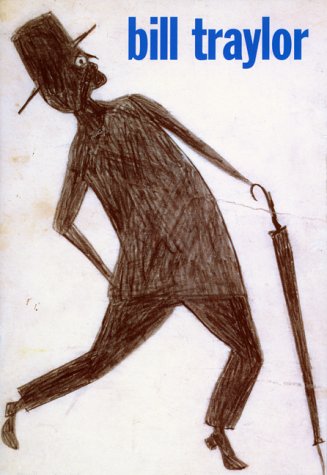 Bill Traylor Postcard Book
by Bill Traylor
Publisher's Description
30 removable postcards of the drawings of outsider artist Bill Traylor. Traylor was born a slave on an Alabama plantation in 1854 and worked for seventy years as a field hand before moving to Montgomery to work as a factory work until rheumatism prevented him from continuing any longer. In the city, he slept at night in the back room of a funeral parlor and passed his days at a pool hall where he began drawing at the age of 84. Using cardboard and working with a small stick, pencils, and poster paints Traylor sketched scense he rembered from his days in the rural confines of the plantation as well as people on the streets of Montgomery. Considered one of the masters of outsider art, Traylor produced an estimated 1,500 works in the short period from 1938 to 1941, stopping in 1942 when we moved north to stay with his children. After leaving the south he produced few if any works and ultimately stop working, even after returning to Montgomery. In 1947, Bill Traylor passed away in a nursing home. After his death his work gained in prominence and found a respectability among the art community that is reflected in the collections that have acquired some of his pieces - among them the MOMA, the Metropolitan, the Whitney, the High Museum, the Montgomery Mueseum of Fine Art, and the National Museum of AmericanArt in Washington, D.C..
ISBN: 1584180315
Publisher: Fotofolio
Paperback : 30 pages
Language: English