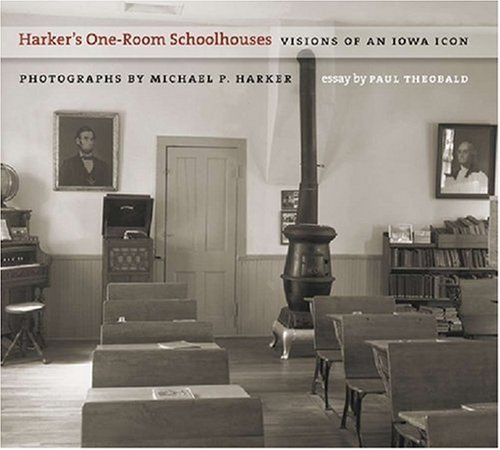 Harker's One-Room Schoolhouses: Visions of an Iowa Icon (Bur Oak Book)
by Michael P. Harker
Publisher's Description
In Harker's Barns documentary, photographer Michael Harker captured the glory and the decay of one of rural America's most elemental icons. Now in Harker's One-Room Schoolhouses he brings another rural American icon back to life. His stark and stunning photographs of these small, neat buildings - once the social and educational center of rural life, now either abandoned or restored to an artificial quaintness - encapsulate the dramatic transformations that have overtaken the Iowa countryside.Michael Harker's goal is to record Iowa's historically significant architecture before it disappears forever. From Coon Center School no. 5 in Albert City to Pleasant Valley School in Kalona, North River School in Winterset to Douglas Center School in Sioux Rapids, and Iowa's first school to Grant Wood's first school, he has achieved this goal on a grand scale in Harker's One-Room Schoolhouses.Educational historian Paul Theobald tells the story of the rise and fall of Iowa's one-room schools, whose numbers fell from close to 15,000 in 1918 to only 1,100 in 1960, all of which had ceased to function as schools by 1980. Moving from the state-wide story to the personal, he introduces us to George Coleman, son of a local farmer and school board director, who kept a sparse diary between December 1869 and June 1870. Young George's words reveal the intimate way in which one-room schools interacted with the local community, including the local economic scene. Theobald ends by suggesting that these one-room relics of the past may again prove useful.
ISBN: 1587297035
Publisher: University Of Iowa Press
Paperback : 94 pages
Language: English
Dimensions: 9.8 x 8.8 x 0.3 inches